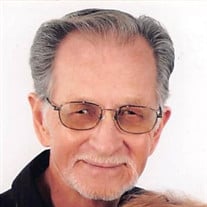 Arnold Eugene Guymon, beloved husband, father, son, brother, grandfather, great-grandfather, uncle and friend, passed away on August 10, 2021 at the age of 86, after a short illness surrounded by his loving family. Arnold was born January 12, 1935 to Efton and Dorothy Guymon, in Elkhart Kansas. Arnold graduated from Colbert High School in 1954 and married the love of his life, Charlene, on November 27, 1954 and celebrated 60 wonderful years together until Charlene’s passing on November 20, 2014. Arnold and Charlene lived in Colbert for a time. After the birth of their son David in 1956, they migrated to Chelan, Washington, with the Guymon family to work with the fruit harvesting crews. They later came back to Colbert where their daughter Dianna was born in 1958. Arnold worked at many different companies during his lifetime which included Dam Site Fishing barge, Yellow Jacket Boat Co., Johns Manville Corp., retiring from Alcoa in Denison. There was nothing that Arnold couldn’t build as he left his family with many mementos to remember him by. He was the ultimate craftsman. From wooden spinning tops he would build in his shop for the grand kids to the homes he raised his family in. He was an avid hunter and fisherman who's passion for guns was passed on to his grandsons. Arnold could do it all. Arnold and Charlene enjoyed traveling. They loved flea markets, cruises and family time at their home. For their 50th wedding anniversary they traveled by passenger train through the Colorado Rockies during one of the worse blizzards on record. In the later years of their lives Arnold and Charlene helped with their special great granddaughter Samantha and spent special days and birthdays with Rhylar, Wyatt and Charlee. After Charlene passed, Arnold moved in with his daughter Dianna with whom he lived with until his passing. His son and daughter were instrumental in making him comfortable in his last days. Arnold was a Christian of the Baptist faith. He will be missed by all of us. His love and wisdom will always be a part of us. Arnold is survived by his son, David Guymon and wife Sonja. Daughter Dianna Bates and husband Ricky. Sister, Lavaughn Allen, brother, Nickey Guymon. Grandkids, Chad and Erin Guymon, Nikki and Brad Sneed, Derrick and Angie Bates, Daniel and Sharron Bates. Great grandkids, Cadie, Samantha, and Rhylar Bates, Payton and Jackie Guymon. Wyatt and Charlee Sneed and many nieces, nephews, cousins and friends. Arnold was preceded in death by his loving wife Charlene. His mom and dad, Efton and Dorothy Guymon. Pallbearers will be Derrick Bates, Daniel Bates, Rhylar Bates Brad Sneed, Wyatt Sneed, Chad Guymon, Greg Guymon and Garrett Guymon. Family time will be from 6-8pm Sunday night at Brown’s Funeral Home in Durant Ok. Services will be at 11am Monday morning at First Baptist Church in Colbert Ok. Interment will follow at The Garden of Memory Cemetery in Colbert Ok. Pastor Randy Lewis, a long time family friend will officiate the services. Condolences may be sent to the family at www.brownsfuneralservice.com. Arrangements are under the direction of Brown’s Durant and Cremation Service. https://www.tributeslides.com/tributes/show/NJ5R96LWPYBFY5DW

The family of Arnold Eugene Guymon created this Life Tributes page to make it easy to share your memories.

Send flowers to the Guymon family.