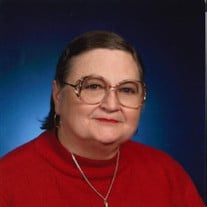 Barbara M. Brown, wife, mother, grandmother, great-grandmother, sister, aunt and friend went home to be with her Lord on Sunday, March 14, 2021, at the age of 80. Barbara was born December 13, 1940 in Stephenville, Texas to AY and Iris McIlroy. She grew up in Denver City, Texas. After graduating Denver City High School, she attended Lubbock Christian College. Barbara married Clinton Coy Brown, also of Denver City, Texas, on December 26, 1959. Barbara and Coy lived in Las Cruces, New Mexico, Irving Texas before they settled in Albuquerque, New Mexico to raise their three children: Weldon Brown, Clinette Hosier, and Pamela Essary. Barbara was preceded in death by her parents AY and Iris McIlroy, brother Mac McIlroy, and son Weldon Brown. She is survived by her husband Coy Brown of Albuquerque, daughters Clinette Hosier and husband Bruce of Corrales, New Mexico and Pamela Essary and husband Larry of McNeal, Arizona, and daughter-in-law Sharyl Smith Brown of Albuquerque, New Mexico, sisters Janet Henson and husband Doug of Eastland, Texas and Karen Sullivan and husband Gary of Granbury, Texas, 8 grandchildren, 11 great-grandchildren, and numerous nieces and nephews. Barbara was a public servant over her 25-year career working at the White Sands Missile Range, Department of Defense in Property Disposal and the Defense Nuclear Agency, Veterans Administration and the Federal Bureau of Investigations Houston and Albuquerque Offices. She enjoyed secretarial type work. Barbara worked behind the scenes ensuring everything from massive auctions and audits at the Property Disposal ran smoothly to accurately transcribing for the FBI to keeping Coy on track in his businesses. In her early adult life, Barbara was active in Beta Sigma Phi Sorority. She also was an active member of her churches teaching Sunday School and serving on the Missions committees. Barbara was a steady and true figure in so many of her children’s friends lives as well earning her the name of Mama Brown. She also enjoyed reading, crocheting, word search books, correspondence via snail mail, and in recent years Bingo. Barbara’s greatest passion was her family! Caring for her husband of 61 years, children, their spouses, grandchildren, and great-grandchildren always took precedence. She always expressed her love for us but her actions spoke so much louder than words whether it was baking a cherry pie for each air cleaner sold, sewing Barbie doll clothes, going horseback riding, surrendering her cane for countless sword fights and stick horse rides, playing countless games of memory, teaching crocheting, or just talking with us about life. Barbara, Mom, Grandmama, Aunt Barbara, Mama Brown touched so many lives, and will be missed in so many ways. The charities that Barbara was passionate about were; Heart Institute at Children's Hospital Colorado, as she has a great grandson who is a "heart baby," as well as Pancreatic Cancer Action Network. In lieu of flowers, feel free to make contributions to these charities in her honor, but any flowers sent to the family are very welcome. Services were held on Monday, March 29, 2021 11:00am at First Christian Church, 10101 Montgomery Blvd NE, Albuquerque, New Mexico. Interment will 11:00 AM April 1, 2021 at the Brown Family Cemetery in Armstrong, OK. Local arrangements are under the direction of Brown’s Durant Funeral and Cremation Service.

Barbara M. Brown, wife, mother, grandmother, great-grandmother, sister, aunt and friend went home to be with her Lord on Sunday, March 14, 2021, at the age of 80. Barbara was born December 13, 1940 in Stephenville, Texas to AY and Iris McIlroy.... View Obituary & Service Information

The family of Barbara M. Brown created this Life Tributes page to make it easy to share your memories.

Send flowers to the Brown family.