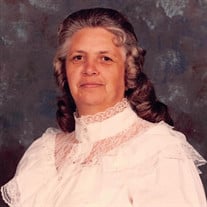 Betty Lucille Lowe, beloved mother, and grandmother left this earth to be with her Heavenly Father on January 25, 2021, in Durant, OK. Born on September 12, 1939, to Irvin and Martha Dawson in Eufaula, OK, Betty grew up during the Depression. Despite the economic hardships her family of farmers faced, her loving parents ensured she and her 6 siblings were raised with love, laughter, and the Lord. Her tales of picking more fights with her sister than she picked cotton on their farm are legendary. And in 1958, she met and married Arbie Lowe. The couple traveled extensively with Arbie’s surveying work, but settled in Milburn, OK, in 1971, where she would live until her death. Throughout her life, Betty was a member of the Assembly of God church, enjoyed quilting, craft shows, baking, and was always game to go garage sale shopping. Any given weekend would find her combing the newspaper for upcoming sales. Many in her family look back and smile at some of the off-the-wall clothing and gifts that Grandma found at yard sales. For many years, she worked as a hospital dietician. Later, she worked in housekeeping for a local casino. Her main focus in life, however, was her family. She loved her three “boys” to pieces and spent many weeks preparing for annual Christmas get-togethers. Her icebox cake and pinto beans are Lowe Christmas staples. Aside from visiting with her sons and grandchildren, she also loved to visit her numerous friends and family back in Eufaula. Many family reunions were spent in the old schoolhouse close to her family home. Though toward the end of her life she was unable to get to Eufaula as much as she would’ve liked, everyone there was still very much on her mind and in her heart. She is preceded in death by her husband Arbie Lowe, their infant daughter Kelli Dawn Lowe, her parents Martha and Irvin Dawson. Her brothers and sister in laws Carl Dawson, Willie Dawson and Jimmy Dawson, Warren “Buck” Dawson and wife Willie Mae, Marvin Dawson, and wife Bernice. Sister Carrie Henson and Husband John. Though she is gone, she will live on in the hearts of her 3 sons, 10 grandchildren, 19 great-grandchildren, and many nieces, nephews, and cousins. Betty is survived by her sister Lahoma Henson of Denison, TX. Sons, Danny Lowe and wife Bonnie of Milburn, Leslie Lowe of Wilburton, and Doug Lowe and wife Tammy of Howe, TX. Grandsons Zac Lowe and wife Philisha of Shawnee, and Jacob Lowe of Wilberton. Granddaughters Carrie Lowe of Emporia, KS and Maggie Lowe and husband Joseph Malone of Wilburton, Kelli Frank and husband Troy of Silo, and grandsons Lucus Lowe and wife Lindsey of Wilburton, Chad Lowe and wife Leah of Milburn, Casey and wife Jacee of Okemah, Sarah Evans and husband JD of McKinney, TX, and Logan Lowe of Howe, TX. . Along with numerous nieces and nephews and 19 great-grandchildren. Memorial services will be scheduled at a later date.

Betty Lucille Lowe, beloved mother, and grandmother left this earth to be with her Heavenly Father on January 25, 2021, in Durant, OK. Born on September 12, 1939, to Irvin and Martha Dawson in Eufaula, OK, Betty grew up during the Depression.... View Obituary & Service Information

The family of Betty Lowe created this Life Tributes page to make it easy to share your memories.

Send flowers to the Lowe family.