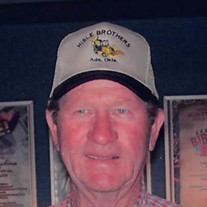 Billy “Jack” Mitchell of Utica, Oklahoma passed away on Sunday, June 27, 2021 in Durant, Oklahoma at the age of 84. Billy was born on February 12, 1937 in Utica to Glenn and Maudie (Pruitt) Mitchell. Jack graduated from Utica Schools and later married Rosalie Dansby on March 24, 1963. They were blessed with two children and 52 plus years of marriage until Rosalie’s passing on November 14, 2016. He joined the Army on September 6, 1956 with six of his buddies and he proudly served until his Honorable Discharge. He worked as a plumber and was a rancher. He was a member of the Albany Masonic Lodge and was a Rural Water #5 board member. While living in Texas, Jack and Rosalie loved hosting Christmas parties and costume parties where a silly game was sure to be played. After moving back to Oklahoma, a hand of 42 was enjoyed with family and friends almost weekly. Jack enjoyed traveling and taking his family across the country to visit family whether it be the Gulf of Mexico, Florida, Michigan or Nevada. He enjoyed fishing and hunting in his early years. He treasured his family, especially his children and grandchildren. Many memories were made on deer leases and camping at the lake with family. In later life Jack enjoyed watching bull riding on TV and taking his dogs for a ride. Jack was preceded in death by his wife Rosalie (Dansby) Mitchell; parents Glenn and Maudie Mitchell; sister Sue Pickett and brothers Elbert “Hoss” Mitchell and Roy Mitchell. Jack is survived by his children Charla Hutchison and husband Jimmie of Utica, OK and Harrell Mitchell of Ft. Worth, TX; grandchildren Katy Landry, Weston Mitchell, Austin Mitchell, Bryce Hutchison and wife Melissa and Kyle Hutchison; brothers Jerry Mitchell and wife Deanna and Troy Mitchell; sisters Helen Mitchell, Brenda Russell and husband David and Sylvia Nell Taylor and numerous extended family and friends. Funeral services will be held at 2:00 PM Thursday, July 1, 2021 at Brown’s Funeral Service Chapel. Pastor Phillip Rowland will officiate. Interment will follow in Highland Cemetery in Durant with Kory Thames, Tanner Farrington, Anthony Winnet, Bobby Gene Mitchell, Kenny Mitchell and Randal Greenhaw serving as pallbearers. Honorary pallbearers will be Greg Edwards, Bobby Dale Mitchell and Keith Sikes. The family will receive friends at the Funeral Home on Wednesday evening from 6-8 PM. Condolences may be sent to the family at www.brownsfuneralservice.com. Arrangements are under the direction of Brown’s Durant Funeral and Cremation Service. https://www.tributeslides.com/tributes/show/FST6CR7L8NQ4ZLY4

The family of Billy "Jack" Mitchell created this Life Tributes page to make it easy to share your memories.

Billy “Jack” Mitchell of Utica, Oklahoma passed away on Sunday,...

Send flowers to the Mitchell family.