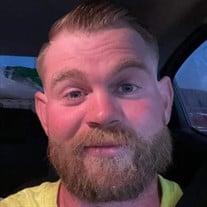 Dylan Van-zetten,age 30, passed away April 30th 2022. He was born April 13th,1992 to Missy Harris in Ardmore Oklahoma.He attended Madill Public Schools up until Jr. High where he then moved and went to Sherman Public Schools,ending up in Mckinney... View Obituary & Service Information

The family of Brian Dylan Van Zetten created this Life Tributes page to make it easy to share your memories.