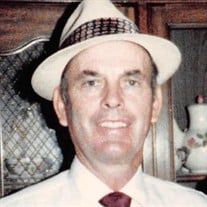 Carlton Ray Reeves was born on June 16, 1931 in Cartwright, Oklahoma to Ira Fulton Sr. and Eula Lee (Willeford) Reeves. Mr. Reeves passed away on July 7, 2020 at Texoma Medical Center after a lengthy illness at the age of 89. C.R. or Sonny as he was called was of humble origins and beginnings. He worked his way up in life from working in an apple orchard in Washington State starting in 1949. He worked as a builder in 1957 and later became a developer and investor in real estate. He became a Christian in 1958 and was a member and deacon of Platter Baptist Church for 60 years and a 32nd degree Mason of 50 plus years. He was a man that always saw the good in people and would always help a stranger in need. Sonny leaves behind his wife of 70 years, Jimmie Faye (Fisher) Reeves; sons, Steve Reeves and Barry Reeves and daughter in law Charlotte; brother, Jimmy Reeves; sister, Ina Simmons and husband Hal; granddaughter that he raised Courtney Reeves-Monroe and husband Jeff, granddaughter Jennifer Cavender and husband Todd and grandson Ben Reeves; great grandchildren Lydia Parson, Will Brister, Laney Cavender, Carter Reeves and Crosby Reeves; great greatgrandchild Grayson Brister and his caregiver Brenda Williams. Sonny was preceded in death by his parents Ira and Eula Reeves and siblings, Howard, Vernon, Hoss and Maurice Reeves and Virgie Reynolds and Nancy Nix. Funeral services will be held at 11:00 AM Friday, July 10, 2020 at Platter Baptist Church. Pastor Donald Ford will officiate. Interment will follow in the Garden of Memory Cemetery with Ben Reeves, Carter Reeves, Will Brister, Tod Cavender, P.J. Jones and Todd Greenway serving as pallbearers. The family will receive friends at the Funeral Home on Thursday evening from 6-8 PM. Condolences may be sent to the family at www.brownsfuneralservice.com. Arrangements are under the direction of Brown’s Durant Funeral and Cremation Service. https://www.tributeslides.com/tributes/show/JMMTMS442GMP3RQM

Carlton Ray Reeves was born on June 16, 1931 in Cartwright, Oklahoma to Ira Fulton Sr. and Eula Lee (Willeford) Reeves. Mr. Reeves passed away on July 7, 2020 at Texoma Medical Center after a lengthy illness at the age of 89. C.R. or Sonny... View Obituary & Service Information

The family of C.R. "Sonny" Reeves created this Life Tributes page to make it easy to share your memories.

Send flowers to the Reeves family.