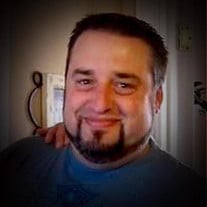 Christopher Scott Newell, loving son, brother, uncle, cousin and friend, quietly left this earth on June 10th, 2020 at the age of 47. Scott was born to Greg and Cindy (Taylor) Newell on July 7th, 1972 in Salina, Kansas. At ten-years-old, he moved with his family to Durant, Oklahoma, where he was part of the inaugural wrestling program at Durant Middle School. He continued wrestling at Durant High School where he was a four-year letterman, coached by his father, Greg. After graduation, Scott discovered a natural talent for sales and service, which translated into a successful career working for Brady’s Shoes, Durant Lumber, Rhynes and Rhodes Furniture, and Madill Chevrolet. He loved taking care of his customers, and was exceptionally good at it. He was a hard worker, and had a firm philosophy that if you couldn’t do something right, you shouldn’t do it at all. His years honing these professional skills led him to what would eventually be his perfect niche as a regional slot technician for Konami Gaming. He proudly served a large, multi-state region, which included Choctaw Casino and Resorts. In his personal life, Scott was a passionate fan of sports, including OU football, NCAA wrestling, MMA, Indy car racing, Dallas Stars hockey, and anything that his beloved nephews or nieces participated in (although he usually insisted on leaving early to beat the traffic). He, himself, was an avid skydiver for many years at Skydive Dallas, where he fell in love with the rush, as well as the culture and community of his fellow skydivers. In addition to sports, Scott loved tattoos, motorcycles, heavy metal music, concerts (he’d easily been to 100 plus), cheesy 80’s movies, and spending time with friends and family. He’d recently bought his first house, and settling into his new neighborhood was truly like coming home for him. He and his neighbors grew close, grilling and hanging out, and his door was almost always open to neighborhood kids (and the occasional dog) who dropped by for a visit. But as much as Scott enjoyed spending time at his new place, he was also drawn to where his family was. He visited and called often, checking in and making sure everyone was well and taken care of. He especially cherished his time in Clay Center, Kansas, where his grandparents and cousins lived. Scott leaves behind a legacy and memories too vibrant and full to be able to fit inside a matter of paragraphs. Simply put, he was a good man- he was a loyal friend, a thoughtful son. He could make anyone laugh, and was genuinely fun to be with. He had a quick, easy smile and a kind heart, and will be deeply and forever missed by all those who were lucky enough to have been loved by him. Scott was preceded in death by his maternal grandparents, Nancy Lou and Gerold Taylor, and his paternal grandparents, Darlyene and Loyall Newell, Jr. He is survived by his parents, Greg and Cindy Newell of Durant, his sister and brother-in-law, Carie and James Dry of Durant, his brother and sister-in-law, Matt and Kaylie Newell of Medford, Oregon, his nephews, Kannon, Nic, Karson, Tucker, and Noah Scott Dry of Durant, his nieces, Lucy and Clara Newell of Medford, Oregon, his aunts and uncles, Gloria and Joe Newell of Clay Center, Kansas, and Debbie and Perrie Seyffer of Longford, Kansas, Scott Taylor, Mark Taylor, his great aunt, Barb Platoff of Clay Center, Kansas, his cousins Sarah (Jon) Massie, Caddie Baldwin, Ben (Jenny) Newell, and Heidi (Stefan) Densmore, his friends Autumn and Daniel Thurman, their children, Axel, Aspen, and Ayce, and T.J. White and his son Gavin. Those who would like to honor Scott’s generous spirit are welcome to donate to a special account at First United Bank, 1400 West Main Street, Durant, Oklahoma, 74701. 1(800)-924- 4427. Please designate account #102327459. All donations will be used to support the Humane Society, and Scott’s lifelong interest in Durant Athletics. An outdoor celebration of Scott's life will be held at a later date. Services are under the direction of Brown's Durant Funeral and Cremation Service.

Christopher Scott Newell, loving son, brother, uncle, cousin and friend, quietly left this earth on June 10th, 2020 at the age of 47. Scott was born to Greg and Cindy (Taylor) Newell on July 7th, 1972 in Salina, Kansas. At ten-years-old, he... View Obituary & Service Information

The family of Christopher Scott Newell created this Life Tributes page to make it easy to share your memories.

Send flowers to the Newell family.