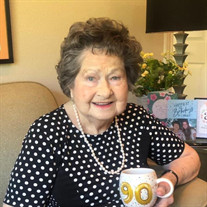 Clara Mae Dow was born on October 11, 1930, in Paris, Arkansas, to Clarence and Lillie Mae Curtis Minor. She passed away on Tuesday, March 9, 2021, in New Braunfels, Texas while at her second home at her daughter Linda’s in special living quarters designed especially for her comfort. Clara was educated in Paris, Arkansas, and she was employed as a telephone operator prior to her marriage. She married John Carl (J. C.) Dow on December 22, 1952, in Lowe’s Creek, Arkansas at the Methodist Church. Together they had six children, and she dedicated her life to raising her family. While the children were small, J.C. transitioned from operating a dairy to working for the Corp of Engineers. After living many years in Arkansas, this job took them to Stigler, OK before they moved to Durant, Oklahoma in 1978 where she continued to reside until her death. Her husband John passed away on February 15, 2011, in Durant, Oklahoma, at the age of 82 after 58 years of marriage. No matter where they resided, there was always a garden and she was adept at canning and preserving food. Clara was an expert at preparing large meals and made it her mission to have food on the table when J.C. got home from work. Whether being a grandparent or offering parental guidance, she was always the peacemaker yet fiercely protective of her family. She enjoyed being involved in the church whether in worship, Bible study, or fellowship. The family was raised knowing the importance of having a personal relationship with Jesus Christ. The kids also knew what it meant to develop a work ethic as she was right there beside them waking up early to roll newspapers before running a route on their bicycle or running them around town with a lawnmower in the trunk so they could mow yards. When it came to sports, she did not miss a game, and the kids could always pick their mother’s voice out of the crowd cheering them on. The family is accustomed to large gatherings such as she experienced at 50 years of marriage. The celebration was held at Grace Baptist Church in Durant where she was a member. The 89th birthday party was held at her home where most of her family was able to share memories. Her recent 90th birthday celebration was moved to virtual, but the family was able to make her day special. She is survived by her Children: Linda Gail Schmedt and husband Wayne of New Braunfels, Texas; John Timothy Dow and wife LeAnn of Jonesboro, Arkansas; Bobby Carl Dow and wife Colleen of Aubrey, Texas; David Neal Dow of Durant, Oklahoma; Steven Glynn Dow and wife Donna of Utica, Oklahoma; and Sherri Lynn Fondren of New Braunfels, Texas. She is also survived by 17 grandchildren: Cari Buntin and husband David of New Braunfels, Texas; Jonathan Schmedt and wife Apple of Chicago, Illinois; Stephanie Dow of Tonkawa, Oklahoma; MacKenzie Dow of Jonesboro, Arkansas; Kelsey Mason and husband Ty of Trumann, Arkansas; Erika Erb and Keri Erb of Tampa, Florida; Bobby Dow Jr., Will Dow, and Kathimae Dow of College Station, Texas; David Heath Dow and wife Sarah of Durant, Oklahoma; Emily Dow and husband Ben Harrahill of Van Alstyne, Texas; and Daniel Dow of Calera, Oklahoma; Justin Dow and wife Jenny of Valliant, Oklahoma; Nathan Fondren of Boston, Massachusetts; Ryan Fondren of Miami, Florida; and Zach Fondren and wife Marcelle of Williamsburg, Virginia. Left to carry on her legacy are 21 Great Grandchildren plus two on the way: Leighton Buntin, Olivia Buntin, and Carson Buntin; Gavin Wynn Schmedt; John Block, Zane Block, Devin Wilson; twins Miles and Steele Mason; Isabella Hollis, Toby Hollis, and Ryan Harrahill; Caleb Dow, Lucas Gaston, Isabella Gaston; Logan Dow, twins Maddison and McKinley Dow, and a second set of twins soon to arrive; and Eliana Fondren, Cecily Fondren, and Dalton Fondren. She was predeceased by husband J.C., her parents, granddaughter Robin Fondren, and sisters Lotha Cooper, Jimmie McElhany, Imogene Davis, Patsy Darr and an infant sibling. https://www.tributeslides.com/tributes/show/LPQDMRPTYRM2YKX4

Clara Mae Dow was born on October 11, 1930, in Paris, Arkansas, to Clarence and Lillie Mae Curtis Minor. She passed away on Tuesday, March 9, 2021, in New Braunfels, Texas while at her second home at her daughter Linda&#8217;s in special living... View Obituary & Service Information

The family of Clara Mae Dow created this Life Tributes page to make it easy to share your memories.

Send flowers to the Dow family.