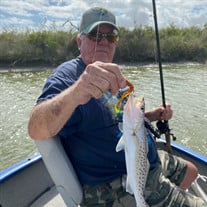 On Sunday, November 22nd, Clint “Butch” Riddle of Buncombe Creek Oklahoma died at the age of 76 resulting from complications from Covid. He was born to Johnnie Riddle and Neda Thornton Riddle on January 13th, 1944 in Anadarko, OK. Clint nicknamed “Butch” at an early age was born 6th in line of 7 children (3 sisters and 3 brothers). In order of birth, the siblings consisted of Vera Branam, Johnnie Doyle, Neda Thelma Saathoff, Luther Arron, Petrovia “Trova” Elrod, Clint Dewayne, and Walter Ray. He spent most of his early years hunting and fishing with his father, brothers, and friends. He played football for Anadarko High School and was always a fan of OU football. Clint married Patricia Jean Curtis in September of 1964 and had 3 sons, Clint Jr., Johnny, and Tommy. Butch served in the Army as a member of the special forces. Afterward he earned a bachelor’s degree, graduated nursing school, and became a nurse anesthetist working most of his career at Pauls Valley General Hospital. He was an avid golfer and fisherman traveling to places like Alaska, Canada, and South America on fishing trips mostly with a couple of his fishing buddies. He coached his son’s in little league baseball and served as President of the little league association for many years helping coordinate upgrades to the local baseball fields alongside many of the player’s parents. Clint retired to Buncombe Creek where he spent most of his time fishing and entertaining friends. Later he met Subie Brown who shared his passion for traveling and spending summers in the cooler climates of the Mountains including his oldest sister Vera’s cabin in Colorado. While there he enjoyed fishing the lakes and rivers for trout and looking at wildlife. Often Clint and Subie could be found traveling with grandnephews from Arkansas and San Antonio and other friends to fish bass tournaments and fish the coastal waters of the gulf. He is survived by his wife, Subie Brown Riddle, his sister, Trova Elrod, his three sons Clint Jr., Johnny (his wife Andrea Riddle), and Tommy Riddle as well as numerous nieces, nephews, and granddaughters. Due to covid a memorial is postponed until Spring when family and friends will gather for a celebration of life at Lake Texoma.

On Sunday, November 22nd, Clint &#8220;Butch&#8221; Riddle of Buncombe Creek Oklahoma died at the age of 76 resulting from complications from Covid. He was born to Johnnie Riddle and Neda Thornton Riddle on January 13th, 1944 in Anadarko, OK.... View Obituary & Service Information

The family of Clint Riddle created this Life Tributes page to make it easy to share your memories.

Send flowers to the Riddle family.