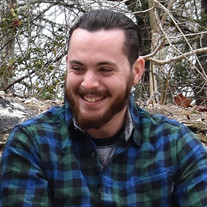 Colin Branagh Phipps, 27, died on March 17, 2021. Colin was born July 9, 1993 in Sherman, TX to Kathy (formerly Phipps) Tubbs and Nick Phipps. He spent his first two years in Durant, OK before the family moved to Farmers Branch, TX. He returned to Durant in 2017. Colin was funny – his laugh was infectious and his wit was fast and sharp – smart, soulful and sensitive, especially talented in athletics and the arts, and he loved the Dallas Stars, OU football, and expanding his vocabulary. He journaled to process his feelings and wrote songs and poetry to share them; and he loved hard. He sang, played guitar and drums, and he was a natural athlete, hockey being his first love, followed by baseball. He also loved concerts, road trips (music all the way up, of course), Thanksgiving, and rescuing animals. Above all, he loved his family. Colin could have been anything he wanted, but underneath the smile that could light up a room was a sadness that drove him to self-medicate, which led to alcoholism and addiction. He wanted to live, and he wanted to build a happy life. He went to rehab, he tried on his own, he slipped and tried again too many times to count. The last slip was the one that took him from us. Colin’s brother-in-law said, “He always had the same smile, no matter how he felt on the inside. He wanted you to feel happy. He cherished family more than anything and he made me feel like family from the first time I met him, and he has been my brother ever since. He had the biggest heart of anyone, and he wanted to share that with anyone who would let him. He looked so tough on the outside, but he had the biggest heart.” Colin was the beloved son of Kathy and Drew Tubbs and Nick Phipps. He was also adored by his children Natalie, Bethany, Ki, a little one on the way, and fiancée Amanda Hooser. He was a cherished brother to Amber Sath and husband Danith (beloved uncle to Cameryn, Juno and Jack), Carmen Chloupek and husband Eric Abner, Devin Phipps, and Blake Phipps. He was the much loved grandson of Jeannine and Rick Belch, Thomas Phipps and the late Betty Phipps, and was preceded in death by great-grandparents Gene and Eber Hull and D.B. and Lucille Robnett. Colin will also be greatly missed by family members Jeff Chloupek, Jeffrey Chloupek, Sarah Chloupek, Brandi Tubbs, Connor Manners, Jeanne Porter, Chelsea Porter, and many friends who loved him so. If love could have fixed this, Colin would still be here. Alcoholism and addiction do not discriminate and can bring down the strongest person. If you’re struggling with addiction, please ask for help before something happens that can’t be undone. During your darkest time, know that you are loved and not alone. A gathering to celebrate Colin’s life will be announced at a later date. Cremation services are under the direction of Brown’s Funeral Service Durant. Online condolences can be made at www.brownsfuneralservice.com

The family of Colin Branagh Phipps created this Life Tributes page to make it easy to share your memories.

Send flowers to the Phipps family.