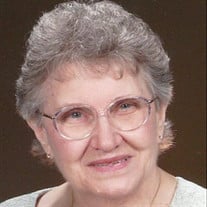 Corinne O. (Tubbs) Boydstun left this earth on Sunday morning, October 4, 2020 and was taken into the loving arms of her Savior and Lord. She passed away at the age of 93 years, 11 months and 14 days. She was born the oldest of three children to Thelma (Scarbrough)and Orlie L. Tubbs on October 20, 1926 in Tupelo, OK. At the young age of 9 years, while living in Seminole, OK., she gave her life to Jesus Christ as her Savior from her sin. She walked with that assurance until she breathed her last, and her faith became sight. She spent most of her youth in Shawnee, OK and graduated from Shawnee High School and afterwards worked at Shawnee National Bank. In 1947 she met at church a young army veteran who had just returned from WW II and was a student at Oklahoma Baptist University. “Love at first sight” could only describe the attraction that brought Harry G Boydstun and Corinne together. After seven months of courtship they were married on September 26, 1947. Harry was called to be a church pastor of the Gospel of Christ, but he often said that the greatest and hardest calling was to be a pastor’s wife. She was faithful to that calling and served “in the shadows” lifting up her husband in daily prayer and standing by his side through the good and the difficult. She took an active roll in each church in leading and teaching of women, youth and childrens’ ministries. She gave up that role but not the title when Harry retired from the pastorate. They were married for almost 68 years until Harry’s death in 2016. She is survived by their children: Harriet (Burt) Ludrick, Beth (Don) Mackey, Diane (David) Sammons, Harry II (Janice) Boydstun, Sarah (Jack) Renfro, Corinne Lambeth, Marsha (Donnie) Chitwood, Carrie Olsen; 39 grandchildren and 46 great grandchildren with two on the way! Others surviving Corinne are one sister, Mary Ann Nickle; sisters in law, Ruth Ann Boydstun, Mary Elizabeth Davidson and Lanelle Boydstun; brother in law, Joe Boydstun and many cherished nieces, nephews and cousins, as well as numerous friends. Those preceding her in death were beloved husband, Harry G Boydstun; parents, Orlie and Thelma Tubbs, brother A.L. Tubbs, several brothers in law and sisters in law. Corinne displayed the Proverbs 31 woman to her children, grandchildren, and great grandchildren as well as all who knew her in her life of service, wisdom and devotion to her Lord Jesus Christ. “WELL DONE, MOM/NANA! WE ALL RISE AND CALL YOU BLESSED!” A special thank you and appreciation for the Brookdale staff and Guardian hospice for the unprecedented love and care that was shown to our Mom/Nana when family could not be present. God bless your heart and service to Corinne. Family Graveside services: October 9, 2:00 p.m. Family will be officiating celebration. Caddo Cemetery, Caddo, OK. Family and friends welcome of viewing Friday, October 9, 2020 10:00 am to 12:00 noon at Brown’s Funeral Home in Durant, OK.

Corinne O. (Tubbs) Boydstun left this earth on Sunday morning, October 4, 2020 and was taken into the loving arms of her Savior and Lord. She passed away at the age of 93 years, 11 months and 14 days. She was born the oldest of three children... View Obituary & Service Information

The family of Corinne O. (Tubbs) Boydstun created this Life Tributes page to make it easy to share your memories.

Send flowers to the Boydstun family.