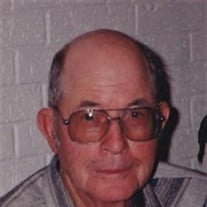 CORLISS HOWARD CURRIE, 97, passed away on January 6, 2021, in Durant, Oklahoma. Corliss was born July 27, 1923, in Happy, Texas, to A M and Jessie Kreger Currie, early settlers in Happy. He was the last surviving child of six siblings. Siblings who pre-deceased him were Florence Myers Miller, Florene Pounds, Millard Currie, Corlyn Ausdemore, and Pauline Burris Miller. Corliss’s wife of 73 years, Juanita Byrd Currie, pre-deceased him on May 29, 2020. Burial will be private at Highland Cemetery in Durant. A memorial service will be held at a later date when it is safe to gather. Corliss is survived by two children: son Dwight Howard Currie and wife Jorja of Bennington, Oklahoma, and daughter Debra Juanita Shaw and husband Jim of Austin, Texas. There are four grandchildren: Chad Howard Currie and wife Rhonda of Bennington, Oklahoma, Kelly Shaw Wheelock and husband Josh of Austin, Texas, Amanda Currie Wallis and husband Chris of Allen, Oklahoma, and Amy Shaw Edwards and husband Dusty of Bentonville, Arkansas. There are seven great-grandsons: Graham, Jude, and John Gabriel Wheelock, Garrett and Brodie Wallis, and Bowie and Gus Edwards. There are three great-granddaughters: Madison Currie Collins and husband Johnathan, Kendall and Karoline Wheelock. Corliss grew up in the Happy/Canyon area, attending schools in both towns. He bought his first calf at the age of 12 for his 4-H project. It was a love affair with cattle for life. He graduated from Happy High School just as World War II was beginning. He stayed home to take care of the family farm but finally enlisted in the Army in February 1945, just as the war was ending. He returned home in 1947 to marry Juanita Byrd. He continued to farm southwest of Happy, adding the first irrigation wells to the dry-land fields in 1941. He was instrumental in getting the natural gas pipeline throughout Swisher County. Having the foresight to see the end of the irrigation boom, Corliss began looking for ranch land—his life-long dream to have a cattle ranch. That ranch was found in 1963 southeast of Bennington, Oklahoma. He and Juanita moved permanently to Oklahoma in June 1969. Son Dwight joined them there in 1970. Together they carried on a cow/calf operation under the name of Currie Cattle Company. That relationship continued until 1999 when Corliss semi-retired and turned the ranch over to Dwight and his son. Corliss continued with his interest in cattle by working as a cattle buyer for interested parties, as well as running his own small herds on leased ranches. He finally totally retired in 2015 when he sold his last batch of cattle. He was happiest when sitting watching his cattle out in the green pastures. He loved to share his observations about cattle behavior—calf nurseries, cow friendships, cow/calf relationships. Corliss had many skills and interests. He was a farmer, rancher, carpenter, welder, mechanic, auctioneer, bank CEO and president, church elder, inventor. He only had a high school education but he was a life-long learner and loved to share his knowledge with others. If he was in a group, he was usually the one in charge. When no one else wanted to step up, he would take on the task and do it well. He was a planner, an organizer, a businessman who was proud to be known as a cattleman. The family requests that any memorial gifts be sent to Westview Boys Home, 120 W Broadway St., Hollis, Oklahoma. Arrangements are under the direction of Brown’s Durant Funeral and Cremation Service.

CORLISS HOWARD CURRIE, 97, passed away on January 6, 2021, in Durant, Oklahoma. Corliss was born July 27, 1923, in Happy, Texas, to A M and Jessie Kreger Currie, early settlers in Happy. He was the last surviving child of six siblings. Siblings... View Obituary & Service Information

The family of Corliss Howard Currie created this Life Tributes page to make it easy to share your memories.

Send flowers to the Currie family.