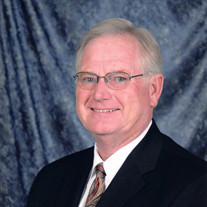 Curtis Keener, age 70, entered into eternal rest on December 31, 2020. Curtis was born in 1950 to Horace and Ruby Keener in Mineral Wells, TX. He graduated from Mineral Wells High School. Curtis married the love of his life, Barbara Crockett, at Lake Murray Chapel in March 1972. Curtis helped with the formation of Calvary Christian Fellowship in Ardmore where he taught classes, helped remodel facilities, and supported the church leadership for many years. Later after moving to Durant, he and Barbara attended Victory Life Church. Curtis began his construction career shoveling dirt as a general laborer, but soon realized his God given talent for building custom homes. Over 40 years he built many homes from the ground up, but enjoyed complicated wood trim work the most. He had passion for investing in real estate and a greater passion in sharing his knowledge and experience with anyone who would listen. Curtis is preceded in death by his parents. He is survived by his wife Barbara. His sons Travis Keener and wife Jennifer, Kevin Keener and wife Marie. His sister Donna Keener, his brother Clay Keener, and grandchildren; Anastasia, Hailey, Sadie, John, Virginia, Henry, Claire, along with many beloved extended family members and friends. Funeral services will be held at 1:00 PM Tuesday, January 5, 2021 at Brown’s Funeral Service. Pastor Jody Ham will officiate. Interment will follow in Hillcrest Memorial Park in Ardmore, OK with Mike Ellis, Gale Jackson, Bobby Singleton, Johnny Norman, Eddie Scott and Jimmy Crockett serving as honorary pallbearers. The family will receive friends at the Funeral Home on Monday evening from 6-7 PM. Condolences may be sent to the family at www.brownsfuneralservice.com. In lieu of flowers, please make donations to: Hands of Hope Food Bank PO Box 427 Durant, Ok 74702 Arrangements are under the direction of Brown’s Durant Funeral and Cremation Service. https://www.tributeslides.com/tributes/show/7CJJKG6RYX37YJK7

The family of Curtis Keener created this Life Tributes page to make it easy to share your memories.

Send flowers to the Keener family.