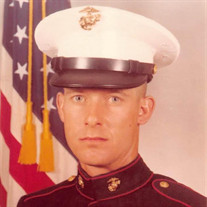 David Neal Waugh was born Wednesday, August 29, 1956 in San Antonio, Texas to parents Victor Lawrence Waugh and Patsy Sue (Berry) Waugh. David passed from this life on Wednesday, June 9, 2021 at his home in Mead, Oklahoma at the age of 64. David is a veteran, served our country with the United States Air Force where he was honorably discharged the 31st day of October 1975. He later would join the United States Marine Corps where he was honorably discharged on the 8th day of June 1984. His selfless sacrifice for our country’s freedom will forever be remembered. David married his sweetheart, Lee Ann Kinsey, on October 4, 1984 at Shawnee, Oklahoma. David worked as a concrete finisher most of his life. Together, he and Lee Ann moved to several towns across Oklahoma and Kansas before ending up in Mead seventeen years ago. David was last employed with Cardinal Glass in Durant for twelve years until his health began declining which forced him to retire. David and Lee Ann attended Community Christian Church in Durant for several years before attending Mead Baptist Church on a regular basis. David enjoyed playing his guitar and singing, fishing, and going to the lake. He would spend hours at the lake just to enjoy the calmness and peacefulness of the water. He also had a special bond with his dog whom went with him everywhere. David was preceded in death by his parents; step-dad, Elwood Fox; brother, Billy Waugh; and several aunts and uncles. He is survived by his loving wife, Lee Ann, of the Mead home; daughter, Angel Waugh, of Mead; son, Steven Turner, of Tishomingo, OK; step-daughters, Cassie Brooks and her husband, Donnie, of Durant, and Lesa Kinsey and Eric Matz of Kansas; grandkids, Bobby Brooks, Tylor Brooks, Kaylee Drury, Alysa Degraeve, Devin Degraeve, Stevie Turner and James Robert; aunts, Viola Sears of Macomb, OK, Rebecca Heitz of Norman, OK, and Kay Allen of Jones, OK, and numerous cousins and good friends. The family will receive friends from 6:00 PM to 8:00 PM on Tuesday, June 15, at Brown’s Funeral Service in Durant. Online condolences may be sent to the family at [email protected] https://www.tributeslides.com/tributes/show/27L7LLMCR7X99BJQ

The family of David N. Waugh created this Life Tributes page to make it easy to share your memories.

Send flowers to the Waugh family.