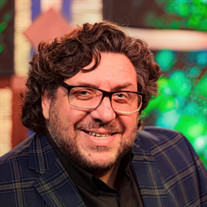 Delton (Dell) Ottis McLain November 23, 1965-March 3, 2021 “This is the day the Lord has made; We will rejoice and be glad in it.” Psalm 118:24 This could be a two-word tribute, beginning and ending with the words irreplaceable and superstar, to describe the essence of our friend Dell McLain, but stopping there would not be enough. Because if we stopped there we would not be doing justice to this incredible human being who captured the hearts of all and brought so much to the Durant community. Dell’s first big break took place in Dallas, Texas when he was born on November 23, 1965 – a mere 55 years ago. The curtain fell on Wednesday, March 3, 2021, when he left this stage for bigger and brighter heavenly venues. He didn’t want to leave us, but when called, he made a graceful exit with love in his heart and prayers of hope for those left behind. Prayers that we would continue on, follow in his footsteps to serve others and keep the torch of his life on earth forever burning. To honor his memory, we promise to keep the fire burning but know the warmth of its glow will be impossible to duplicate. Larger than life, this man who was at least half Molly Risso, with Hugh Grant, Dudley Moore, Mr. French, Rhett Butler, Desmond Tutu, George Carlin, and Lady Gaga mixed in, was nothing short of spectacular in the life he shared with us. Dell had a magnetic personality and a huge presence. If he was on stage, our attention and hearts gravitated to him. If he was in the classroom, we paid more attention. If he was mixing cocktails at a party or on his YouTube channel, we wanted to be part of his tribe. No matter what he was doing, directing, or delighting in, Dell brought us along for the ride. Most of all he was genuine and true to himself. Being true might have meant challenging an opinion, asking for a term-paper rewrite, calling students out for being late or lazy, or instructing someone to get back on stage and try again, but when he challenged us, it was not a frivolous exercise. He wanted us to be better, do better, expect more of ourselves. In earlier days, Dell, the standout student, joined with a troupe of other young actors who became lifelong friends to fulfill dreams of putting on perfect productions at Southeastern. Working side-by-side with mentor Molly Risso, Dell’s characters were/are legendary; his creative portrayals without equal. These were the glory days at Southeastern that brought Shakespeare to rural Oklahoma and made theatre less intimidating. With Dell as the ring leader, this talented group acted in dinner theatres, sat in on tryouts, laughed and cried together, lived together, got wild and crazy, and made history. Dell ventured to New York and New Orleans – with other stops along the way - for training and education before deciding on a return to his Durant home. He wasn’t born here, but he was from Durant. His return was celebrated far and wide, with so many realizing he was bringing along his love for us, the university and a style that makes theatre at SOSU so amazing. He brought history and innovation in the same swoop, made the program his own, and got down to the business of mixing old and new. He was back and times were great again for 23 years with Dell at the helm as Director of Theatre (and many other titles) at Southeastern. Everything went as planned until it didn’t and we were forced to imagine a world without Dell. A world less optimistic, less joyful and just less. Our hearts were broken at the thought, but Dell didn’t want us to linger long in our collective grief. Instead, without a word, he directed us to mentor a student, welcome a stranger, preach a sermon – or listen intently to one, sing a song, lift a spirit, give wise counsel, set high standards in a classroom and beyond, live our lives fully….and laugh; he would want us to laugh. A lot. Dell was preceded in death by his father James Odell McLain and brother Gary Don Spence. He is survived by his biggest cheerleader and fun-loving mom Phyllis Jean McLain; brother Terry Lee Spence and sister Kathryn Ann Olivis. He also leaves behind a family of friends, followers, colleagues and former students who, along with his mom, brother and sister, will miss him daily for the rest of our lives. In anticipation of his departure, Dell worked to create a fund through the Southeastern Foundation that will benefit students. You are cordially invited to skip the flowers and go straight to the foundation with gifts of love and support. Contributions to The Dell McLain Memorial Project, #0341, may be directed to the Southeastern Foundation online at se.edu/giving/give-here/ or by mail to 425 W. University Blvd., Durant, OK 74701. Due to seating capacity and social distancing concerns, there will be no service at this time. An outdoor celebration of all things Dell is being planned for this summer with updates to come. Dell, it seems somehow fitting to let you go with a whispered prayer in the form of these combined words from Shakespeare, “…Like as the waves make towards the pebbled shore, so do our minutes hasten to their end; Each changing place with that which goes before……Good night, sweet prince; and flights of angels sing thee to thy rest.” To close with the sentiments so many have expressed in such a short time, we are thankful for your passion, your presence and the gifts you shared. We are simply better for having known and loved you, Dell McLain. Godspeed.

Send flowers to the McLain family.