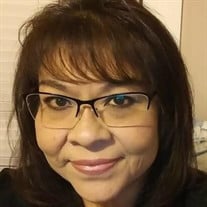 Denise Renee Barboan, better known as Renee or Nae Nae, passed away on Monday November 15, 2021, in Durant, OK at the age of 53. Denise was born on October 27, 1968, in Durant to Daniel Richard Sr. and Shirley Ann (Williams) Barboan. Renee... View Obituary & Service Information

The family of Denise Renee Barboan created this Life Tributes page to make it easy to share your memories.

Send flowers to the Barboan family.