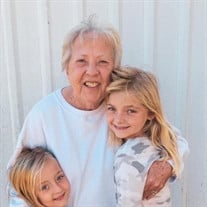 Diana Lynn McCollum 73 passed away May 5th, 2022, in Denison, Texas after a brief illness. Diana was born September 13, 1948, to Tom and Pansy Smith in Ardmore, Oklahoma. She attended grade school in Lebanon until the eighth grade and finished her education at Madill High School. Diana and her husband James were married in July 1987 in Dallas, Texas. Diana and James traveled extensively for many years throughout the states and overseas. Living in San Antonio, Houston, Raleigh, Indonesia, and Jamaica before retiring in 2003 to Buncombe Creek in Kingston, OK. At her time of passing, she had been employed by Buncombe Creek Marina for 12 years. Diana’s favorite pastimes included reading, visiting with her lake friends, and going to the casino. Her kids and her grands were her life. She was selfless with her love, even in sickness she was concerned for her family, not herself. Our sweet Mimi was loved and cherished by everyone who knew her. She was one of a kind and will never be forgotten. Diana is survived by daughters Cindy (Jamie) Norris and Lisa Robbins. Grandkids Kelsey (Caleb) McClaran, Seth Norris and Brady Robbins. Great grands Emma and Allie McClaran. Sisters Nadine (Bob) Whitworth, Geneva Skala and Linda (Clifton) McBeth. Preceding her in death were her parents Tom and Pansy, husband James R. McCollum, sisters Betty Jean Adams, Irene Stiewig, Missy Johnson, and brother Kenneth Stiewig A celebration of life will be announced at a later date. "May God cover the queen with many wings. May He cover her entire family and friends with His blood to heal and comfort, placing guardian angels all around in His name." ~ Kalvin D. Nelson Arrangements are under the direction of Brown’s Durant Funeral and Cremation Service. Condolences may be sent to the family at www.brownsfuneralservice.com.

Diana Lynn McCollum 73 passed away May 5th, 2022, in Denison, Texas after a brief illness. Diana was born September 13, 1948, to Tom and Pansy Smith in Ardmore, Oklahoma. She attended grade school in Lebanon until the eighth grade and finished... View Obituary & Service Information

The family of Diana Lynn McCollum created this Life Tributes page to make it easy to share your memories.

Send flowers to the McCollum family.