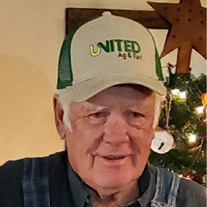 Dickie Joe Cates, age 75, of Bennington OK. He was born on October 21, 1945 in McKinney, Texas to Leslie and Lillian Cates. He attended Lovejoy Elementary in Fairview TX, from the age of 6 to the age of twelve when he went to LA Scott Jr. High in Mckinney TX. He graduated high school from Mckinney High in 1965. He married Sandra Lee (May) Cates on August 15, 1998 in Indiana. They came to Bryan County in August of 1998 Dickie retired from Union Glazier Glass Company. Dickie wasn’t afraid to be up high putting glass in the MGM Grand Las Vegas, Norte Dame, Saint Louis Cardinal Stadium, Luxor Las Vegas and The Mall of American in MN. Dickie was an avid deer hunter and lived for opening day of deer season. Even after he lost his leg he would still climb in that stand and wait for that perfect deer to come along. In the summertime he loved fishing. If you planned on going fishing with him you better plan on being there all day, because he could sit there all day to fish. Dickie was a true animal lover, and took great pride in his chickens, ducks, goats, cattle and dogs. Preceded in death by his Parents, sister Frankie Marie Lucas, Brothers Milton Clay Cates and Johnny Mack Cates and his son Jerry Joe Cates. He is survived by his wife of the home, Brother Willie Don Cates and wife Donna of Garland TX. daughters Tammy Hash and husband Daylin of Caddo Ok, Carla Teel and husband Ben of Blue OK and Tanya Cates of Roland OK. Granddaughters Kashlee Eastwood and husband Justin of Caddo OK, Kayla Williams and husband Kyle of Indianola OK, Terra Jackson and husband Kannon of Caddo OK, Ashlin Gregory of Roland OK, Sara Gaylard and husband Conner of Columbia City Indiana. Grandsons Nathan Harbin and wife Jessica of Durant OK, David Harbin of Caddo OK, Rodney Gregory and wife Makayla of Pilot Point TX, And his very best friend and grandson Brock Allen of Blue OK. 5 other grandchildren and 11 great grandchildren. Numerous nieces, nephews, cousins, and great friends. Funeral Services for Dickie will be at 3:00 PM on Friday March 5, 2021 at Brown’s Funeral Service in Durant. Visitation is Thursday March 4, 2021 from 6:00 to 8:00 PM. Services are under the direction of Brown’s Funeral Service, Durant. Online condolences can be made at www.brownsfuneralservice.com https://www.tributeslides.com/tributes/show/4MCK7F7FFNWLGQ7W

Dickie Joe Cates, age 75, of Bennington OK. He was born on October 21, 1945 in McKinney, Texas to Leslie and Lillian Cates. He attended Lovejoy Elementary in Fairview TX, from the age of 6 to the age of twelve when he went to LA Scott Jr. High... View Obituary & Service Information

The family of Dickie Joe Cates created this Life Tributes page to make it easy to share your memories.

Dickie Joe Cates, age 75, of Bennington OK. He was born on October...

Send flowers to the Cates family.