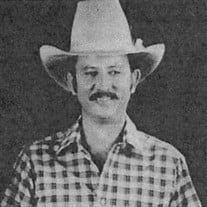 Donald (Don) Ray Wolfe 1940-2021 Don was born in Baird, Texas on July 13, 1940 to parents Granville W. Wolfe and Opal D. Ray Wolfe. Don departed this life at Alliance Health Hospital in Durant, OK after a long illness at the age of 80 years 11 months and 25 days with his wife of 46 years by his side. Don attended school in Texas until age 9 when the family moved to Addington, OK later moving to Wilson, OK where he graduated. After high school Don joined the US Navy and served on the USS Hornet traveling to many countries. On January 10, 1975 Don married his wife Susan whom he called “my baby” in Burkburnett, TX. Don worked for Dallas Airmotive in Frederick, OK. until moving with the company to Dallas, TX in 1985 and retired in 2004. Don and Susan moved to Durant, OK. in 2009 to enjoy living in a smaller town. Don was of Christian faith, enjoyed swimming, camping, fishing and he taught their 3 daughters and grandson Jeff who lived with them and they raised to love nature at an early age. Don wrote song lyrics, entered and won contests in Nashville and California along with his friend Benny Kirk who put music to the words. Don loved God, his family, friends and animals. Don and Susan always taught their children to be there for a friend or family member if they needed them and he could always find a stray dog or cat that needed food and adopted many strays over the years. Don was preceded in death by his parents Granville and Opal Wolfe, his mother-in-law Cora Dafoe, two daughters Susan Kay Hasley and Pam Omar, sisters Lula Ann Wolfe and Lavetta Cox, brothers-in-law Leo Lambert and Jack Kisor. Survivors include his wife of the home Susan, daughter Donna also of the home, grandsons Jeff and his partner Amy, Dillion Defoor and Dusty Defoor, sister Lola Lambert, sister-in-law Betty Ann Kisor of Texas, brothers-in-law Jim Cox, Jerry Teague and wife Ella of Wisconsin and John Teague of Florida, granddaughters Shandi King, special “adopted” son and daughter Jerry and Teresa Hasley, Tammy Taylor whom was and is considered part of the family. Great grandchildren Arianna, Clark, Kaylee, Chevy, a host of nieces, nephews and their families. Don will be greatly missed by his family and friends. There are no services planned at this time.

The family of Donald (Don) Ray Wolfe created this Life Tributes page to make it easy to share your memories.

Don was born in Baird, Texas...

Send flowers to the Wolfe family.