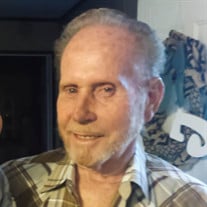 Donald Ray “Pop, or Red” Pearce, age 78, of Caney, OK, passed away at his home on April 19, 2020. Don was born to "Abb" and Lola (Fredrick) Pearce in Bennington, OK on May 27, 1941. He attended Caddo school. Lovingly known to all as “Pop, or Red” he made his home in the Caney area. He married Patricia Lackey “Non” in February of 1960, and they spent many wonderful years together before her passing on February 27, 2013. He loved his family time, cars and working with cattle and he worked for Ford motor company for 25 years until he retired. Donald is preceded in death by his parents, Abb and Lola Pearce, wife Patricia Pearce, his son Randy Pearce, his sisters; Fay, Nadine and Betty Joe, brother J.D. Pearce, his niece that he raised as his own Indira Doherty, son in laws; David Herrera and Carl T., and an infant grandbaby in 2017. “Pop” is survived by his daughters Donese Stanton and husband Robert of Atoka, OK, Clarice Jarvis and her friend J.R. Gabriel of Caney, OK, Melissa Herrera of Caney, OK,his siblings Delphine Weaver and Husband Larry of Hendrix, OK., Ronald Dale Pearce of Rainier, OR., grandchildren; Richie Jarvis and wife Alecia of Durant, OK, Courtney Jarvis and husband Justin DaVault of Atoka, OK, Brandon Jarvis and wife Bella McCarty of Durant, OK, Selena Looper and husband Aaron of Atoka, OK, Miranda Herrera and husband Brian of Atoka, OK, and Autumn Herrera and husband Shakodah of Atoka, OK, in laws, Debbie and Benny Arnot of Durant., OK., Rickey and Gail Lackey of Caney, OK.,Lisa Dillard and husband Ron,Caney, OK., and his great grandchildren; Charleigh, Maverick, Abriella, Brystle, Channing, Korbett, Writlee, Taegon, Jace, Kenzlie, Skylar, David, Braxton, Lillie, Emma, and Cheveyo. he had many belived nieces and nephews and many beloved friends. Serving as Pallbearers will be Matt Workman, Richie Jarvis, Brandon Jarvis, Justin DaVault, J.R. Gabriell, Taegon Jarvis, Autumn Herrera, and Aaron Looper. A come and go Visitation is on Wednesday, April 22, 2020 from 6:00 PM to 8:00 PM at Brown’s Funeral Service Chapel in Durant, OK. We are currently under a Govender’s mandate of 10 people or less on a gathering. Please keep that in mind when coming to services. We will try our hardest to Facebook Live the graveside service. Condolences can be made at www.brownsfuneralservice.com . Arrangements are under the direction of Brown’s Funeral Service in Durant, OK.

The family of Donald Ray "Pop, or Red" Pearce created this Life Tributes page to make it easy to share your memories.

Send flowers to the Pearce family.