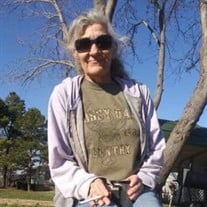 Kingston, OK- Donna Faye Robbins was born Saturday, January 14, 1961 in McKinney, Texas to parents Richard Garcia and Lois Fay (Miller) Garcia. Mrs. Robbins passed from this life on Thursday, February 10th, 2022 in Durant, Oklahoma at the age of 61. Donna worked as a homemaker most of her life. She married the love of her life, Melton Robbins, on November 16th, 1990 in Farmersville, Texas. They have lived in Kingston the past eleven years. Donna enjoyed fishing, gardening, being outdoors, and going to the casino. She loved her animals and spending as much time with her family. Donna was preceded in death by her parents; and brother, Richard Garcia. She is survived by her husband, Melton, of the Kingston home; son, Brandon Robbins of Kingston; daughter, April Robbins of Kingston; son, Dusty Allen of South Padre, Texas; sisters, Debbie Martin of Farmersville, Texas, and Kathy Hamilton of Arkansas; step-daughters, Jessica Robbins and Jennifer Smith, both of Alabama; and several great-grandkids. Funeral services to celebrate Donna’s life will be held at 2:00 PM on Thursday, February 17th, at Brown’s Funeral Chapel in Madill, Oklahoma with Eric Tate officiating. Committal services will follow at Kingston Cemetery. The family will receive friends from 6-8 PM on Wednesday, February 16th, at Brown’s Funeral Service in Madill. Online condolences may be sent to the family at www.brownsfuneralservice.com. Services are under the direction of Brown’s Funeral Service Madill. https://www.tributeslides.com/tributes/show/B5C4NL9DRJFJ8N23

The family of Donna Faye Robbins created this Life Tributes page to make it easy to share your memories.

Send flowers to the Robbins family.