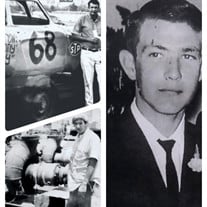 Donnie Victor Armstrong, age 75, passed away on February 27, 2021. He was born in Dumas, Arkansas on August 6, 1945 to Leo and America “Meck” Armstrong. A handful of years later, the family moved to Poway, California, where he attended grade school and graduated from Poway High School. Donnie was a gas turbine, jet engine engineer for over 50 years and mentored many with a genuine promise in the gas turbine engine industry over the years. He began his career with Solar Turbines, Inc. in San Diego, CA in 1965 and retired from Gas Turbine Applications, in Calera, Oklahoma in 2020. He had many hobbies and interests, from building and racing stock cars in the 60’s, to deep sea fishing, target shooting and knife throwing. He was also a member of the NRA. He is preceded in death by his parents Leo James Armstrong and America “Meck” Lea Armstrong, his sisters Genova Kirtley and Virginia McCreery, and his second wife Diane “Jane” Armstrong. Left to cherish his memories are his three daughters Katherine Armstrong and Karen Armstrong both of San Diego California and Karoline Armstrong-Gontang, husband Jeremy and Linda Board, the mother of his daughters of Julian, California. His grandchildren: Kera Marie Vowles, Morgan Lee Parpart, Claudio Babicchio, Christian Duval Armstrong, and Shayne Michael Armstrong. His great grandchildren: Kayleigh Nicole Vowles, Cole Brian Vowles, and Claire Renee Vowles. His sister Margie Alexander and brothers LJ Armstrong, Arthur Ray Armstrong. His cherished nephews Mark Adams and Douglas Armstrong. As well as his special friends: Robert Powers, Tom Ramsey, Kenny Oxford, Melinda White, the Metcalf and Ford families, and so many more. You will be forever loved and missed dad.

The family of Donnie Victor Armstrong created this Life Tributes page to make it easy to share your memories.

Send flowers to the Armstrong family.