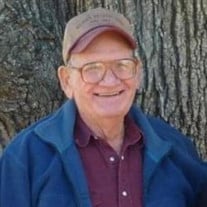 Eddie Wood, 81, of Mead, OK passed away on Saturday, December 5, 2020 at the hospital in Durant, OK. He was born December 21, 1938 in Waurika, OK to Floyd and Ruth (Williamson) Wood. Eddie went to Waurika Public Schools, graduating in 1958. Upon graduation, he moved to Stephens County on Pinto Road near Alma, OK where he built a life for himself. He raised cattle for many years and was also a contract pumper. In addition to his ranching, Eddie helped with the grain elevator and a feed store in Waurika, OK that his father, Floyd Wood, owned for more than 50 years. He married Barbara (Babs) Jones on February 6, 1960. They had two children Raymond Floyd (Chip) and Lisa Ann. Eddie was also proud of the fact that he served 11 years on the Board of Education for the Red River Technology Center in Duncan, OK. Although you may not know it, he was a spiritual person, but he often said, he did not feel the need to “herd up” in a congregation. Eddie requested no memorial service in his honor due to being a private man. The family is abiding by his wishes. Eddie enjoyed playing 42, Canasta and Rummy with his family and would typically start out by saying “you will probably need to refresh my memory because I might have forgotten how to play” as he was in the process of developing a strategy to win. Part of his strategy was hoping you thought he forgot how to play. Eddie fell and broke his leg on October 16, had surgery and was trying to rehab and get back up on his feet. While he was in rehab, no family members were allowed in to see the residents due to this 2020 Covid nightmare that we are all living in but, he still “caught the Covid” as his 5 year old great grandson Cooper said. He fell out of bed there one time awhile back and had to be taken to the emergency room. Babs was actually able to go see him briefly while he was at the hospital and the doctor joked and said he did it on purpose just so he could go on a date with his wife and Eddie said, “damn expensive date!” For anyone reading who actually knew Eddie Wood, that response was spot on! Eddie was preceded in death by his parents, a grandson Kendall Kyle Brown, a granddaughter Clare Emily Wood and a nephew Jay Wood. Eddie is survived by his wife Babs, his son Chip and wife Sammie of Pasamonte Ranch in Grenville, NM, daughter Lisa Brown and husband Rick of Mead, OK and his brother James and wife Jackie Wood of Las Cruces, NM and their son Justin Wood of Albuquerque, NM. He was Pa Ed to his grandchildren, Gus and wife Megan of Grenville, NM, Sally Rastogi of Coppell, TX, Bandi Mahaffey and husband Todd of Lexington, KY, Danica Higgins and husband Cory of Garvin, OK. He was also very proud of his great grandchildren: Arav Rastogi, Bryce Wood, Cooper Higgins “Little Spook”, Kendall Higgins and Abigail Mahaffey. In lieu of flowers, a donation can be mailed to Wood Scholarship, c/o Velma-Alma Schools, PO Box 8, Velma, OK 73491. This scholarship is awarded to a senior of Velma-Alma High School annually, who plans to pursue a career in education. Arrangements are under the direction of Brown’s Durant Funeral Cremation Service.

Eddie Wood, 81, of Mead, OK passed away on Saturday, December 5, 2020 at the hospital in Durant, OK. He was born December 21, 1938 in Waurika, OK to Floyd and Ruth (Williamson) Wood. Eddie went to Waurika Public Schools, graduating in 1958.... View Obituary & Service Information

The family of Eddie Frank Wood created this Life Tributes page to make it easy to share your memories.

Eddie Wood, 81, of Mead, OK passed away on Saturday, December...

Send flowers to the Wood family.