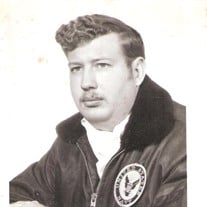 EDWIN W. GOZA Feb 28, 1949-Aug 4, 2020 Edwin (Ed) Goza died peacefully at his home in Kingston, Oklahoma, after a long battle with cancer, on Tuesday, August 4, 2020. A graduate of Fyffe High School, Fyffe Alabama; he was a retired Navy Aviation Electrician. Ed is survived by his wife Deborah; daughter Haley (Siotha) and beloved son-in-law of twenty years, Jeremy Vest, as well as two adored granddaughters Alyssa and Bella Vest, all from Signal Mtn, Tennessee. Also two sisters Ginger Joseph, from Kingston, Oklahoma, and Myra (Bruce) Rasku from Green Bay, Wisconsin; and two brothers Rex Goza from Fyffe, Alabama, and David (Hope) Goza from Mound City, Kansas; as well as, numerous cousins, nieces and nephews. He was preceded in death by his parents Calvin and Jewel Goza of Fyffe, Alabama. Visitation for friends and family will be at Wilson Funeral Home, Rainsville, Alabama on Sunday, August 16, 2020 at 1 pm, with memorial service following at 2 pm. All visitors are reminded to wear masks at this time. On Monday, August 17, a private gathering of the family will be held at the National Cemetery in Chattanooga, Tennessee, for graveside service and internment. Married in 1974, in Chattanooga, Tennessee, Ed and Deborah enjoyed traveling the country and the world, during his years in the Navy; as well as afterward. The family is grateful to the Guardian Hospice team, for their support and encouragement during this final stage of life. We encourage donations to your favorite charity in Ed's memory, especially we appreciate Tunnel 2 Towers https://tunnel2towers.org or Wounded Warriors https://www.woundedwarriorproject.org. Cremation services under the direction of Brown's Funeral Service, Durant, Oklahoma. Online condolences can be made at www.brownsfuneralservice.com

The family of Edwin W. Goza created this Life Tributes page to make it easy to share your memories.

Send flowers to the Goza family.