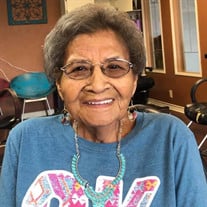 Elsie M. (Peters) Lewis was born September 14, 1935, in Lawton, OK to Caroline M. Jefferson and Jackson Peters. She passed from this life into the next on August 16, 2021, at the age of 85 years. She was of the Baptist faith, having been baptized by her Uncle, Absalom P. Jefferson, at the old Bacon Springs Missionary Baptist Church in Achille, OK. She married Raymond E. Lewis on March 17, 1952, and to this union were born 8 children. She was preceded in death by her parents, Mr. & Mrs. John C. Carnes, her husband, her children, Sonya G. Lewis, Gary D. Lewis, Michael K. Lewis, Raymond Eugene Lewis, and Eddie R. Lewis, an infant sister, Eliza J. Peters, her brother, Danny M. Carnes, and by her best friend and sister-in-law of over 75 years, Bertha G. Lewis. She is survived by her children and their spouses, Deborah K. and Richard Gratner of Ardmore, OK., Billy W. Lewis of the home, and Dickie R. and Lisa Lewis of Purcell, OK, her sister, Lucretia J. Johnson of Ardmore, OK, sister-in-law, Margaret Tenequer of Lane, OK, and daughter-in-law, LacQuita Lewis of Durant, OK. She also leaves behind a legacy of 14 grandchildren, 21 great-grandchildren, and 16 great-great-grandchildren with two more on the way. What a legacy! She also leaves behind numerous nephews and nieces, cousins, and church family members she considered her own and that she loved immensely. Elsie Pitah was an enrolled member of the Choctaw Nation of Oklahoma of the Sixtowns clan and was a fullblood Native, Choctaw, Mississippi Choctaw and a pinch of Chickasaw thrown in for good measure! Wake services will be held at Grace Indian Baptist Church on Thursday, August 19, 2021, beginning at 8:00 p.m. Due to the pandemic, it will be on a come and go basis to allow everyone to pay their respects. Funeral services will be private for immediate family only. A celebration of life honoring Elsie Pitah will be held at a later date. Burial will be at Rosewood Cemetery in Achille. https://www.tributeslides.com/tributes/show/CLQ96NQ67P66NLQ9

Elsie M. (Peters) Lewis was born September 14, 1935, in Lawton, OK to Caroline M. Jefferson and Jackson Peters. She passed from this life into the next on August 16, 2021, at the age of 85 years. She was of the Baptist faith, having been baptized... View Obituary & Service Information

The family of Elsie M. (Peters) Lewis created this Life Tributes page to make it easy to share your memories.

Send flowers to the Lewis family.