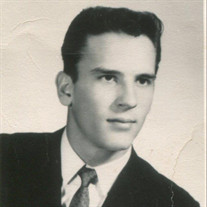 Gary Mack Dominick of Durant, Oklahoma, was called to his heavenly home on September 27, 2020, at the age of 76. Gary was born on April 5, 1944, in Oklahoma City, Oklahoma to Leland and Lorene Dominick. Gary was a 1962 graduate and standout athlete at Boswell High School. He married the love of his life, Patsy Yvonne Faulks August 9, 1964, in Boswell, Oklahoma, and together they raised a daughter, Melissa Beth. Gary majored in education at Southeastern Oklahoma State University and went on to receive his master’s degree in counseling. At the beginning of Gary’s career, he taught and coached in Atoka, Oklahoma. He later moved to Durant and was an elementary school counselor until his retirement. Gary was a beloved husband, father, and papa. He touched the lives of many people during his lifetime, and his family was his most precious possession. Gary enjoyed singing and playing the guitar, golfing, hunting, and fishing. He loved to be outdoors, and the mountains were one of his favorite destinations. If you were lucky enough to know him, you more than likely heard one of his stories. Gary was quite the storyteller and his heart and humor will live on through each and every story he shared. More importantly, Gary was a faithful member of Fairview Baptist Church in Durant, where he enjoyed teaching Sunday School and praying at the altar. Gary is preceded in death by his parents Leland and Lorene Dominick, brother James Dominick, sister Sue Turner, and his nephew Mack Dominick. Gary leaves behind a loving family in his wife of 56 years, Patsy Dominick; cherished daughter, Melissa Phelps and husband Rayford of Calera, Oklahoma; his grandson Trevan Phelps of Calera, Oklahoma, his granddaughter Mallory Phelps of Durant, Oklahoma; his niece Susie Witt and husband Pat Lindsey of Mansfield, Texas and many dear friends. Funeral services will be held on Friday, October 2, 2020, at Fairview Baptist Church in Durant at 2:00 PM with Pastor Bill Ledbetter officiating. Interment will follow in Restland Cemetery in Boswell with Trevan Phelps, Ed Faulks, Randy Houser, John Wigley, David Bullard and Alvie Nelson serving as pallbearers. Family visitation will be Thursday evening from 6-8 PM at Brown’s Funeral Home. Condolences may be sent to the family at www.brownsfuneralservice.com Arrangements are under the direction of Brown’s Durant Funeral and Cremation Service. https://www.tributeslides.com/tributes/show/JGWW93X89H6TLK8T

Gary Mack Dominick of Durant, Oklahoma, was called to his heavenly home on September 27, 2020, at the age of 76. Gary was born on April 5, 1944, in Oklahoma City, Oklahoma to Leland and Lorene Dominick. Gary was a 1962 graduate and standout... View Obituary & Service Information

The family of Gary Mack Dominick created this Life Tributes page to make it easy to share your memories.

Gary Mack Dominick of Durant, Oklahoma, was called to his heavenly...

Send flowers to the Dominick family.