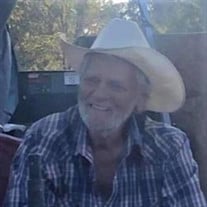 George (Buddy) Jackson Services for George Dwight (Buddy) Jackson, 74, of Bennington, will be held at 1:00 PM on Friday, July 16, at Brown’s Funeral Home chapel in Durant. He will be laid to rest at Jackson Cemetery south of Bennington. Buddy died on Sunday, July 11, in Sherman, Texas. Serving as pallbearers will be Brian Jackson, Ben Jackson, Nathan Jackson, Kevin Jackson, Cassidy Jackson and Roger Curtis. Honorary pallbearers are Andrew Jackson, Jake Jackson, Janeen Curtis and Tena Malone. Buddy was born August 20, 1946 in Bennington, Oklahoma to George Franklin Jackson and Jessie Alice (Hamill) Jackson. He has lived in Bryan County since 1980. Buddy has worked as a painter all of his life, working with his family business, Jackson Painting in Irving, Texas. He also worked with sheetrock and drywall repair. Buddy served in the U.S. Army where he did his basic training at Ft. Benning, Georgia. He fought during Vietnam and was proud of his service to our nation. Buddy enjoyed playing the guitar, singing karaoke, hunting and fishing. His pride and joy were his grandkids whom he loved very much. He was preceded in death by his parents; and brother, Freddie Lane Jackson. Buddy is survived by his wife, Cindy; sons, Brian Jackson and his wife Sally, Ben Jackson, and Dylan Prater; daughter, Michala Holloway; sisters Lenda Andrews, Sandy Milbauer and her husband Joe, and Deanie Cockrill; grandchildren, Jesse, Nathan and his wife Micha, Kevin and his wife Tabi, Jacob, Cash, Wyatt, Andrew, Brayson and Rylie; great-grandkids, Kendall, Jesse Mae, Tuff, and Austin Rae; and six nieces, three nephews and a host of friends. Online condolences may be sent to the family at [email protected] https://www.tributeslides.com/tributes/show/7HDZFSXJPRXH8K8F

George (Buddy) Jackson Services for George Dwight (Buddy) Jackson, 74, of Bennington, will be held at 1:00 PM on Friday, July 16, at Brown&#8217;s Funeral Home chapel in Durant. He will be laid to rest at Jackson Cemetery south of Bennington.... View Obituary & Service Information

The family of George (Buddy) Jackson created this Life Tributes page to make it easy to share your memories.

Send flowers to the Jackson family.