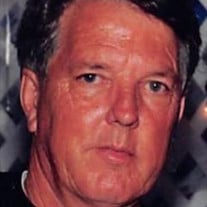 Funeral services for Gerald Usry, 82, of Durant, will be held at 10:00 AM on Monday, July 19th, in Brown’s Funeral Service chapel with Bro. Jimmy Moore officiating. Interment will follow at Highland Cemetery with his grandsons Tyler Usry, Dylan Usry, Evan Armor, Matthew Usry, Bryan Usry, Bryce Usry and Tanner Davidson serving as pallbearers. Honorary pallbearers will be Ronnie Marshall, Rip Tidwell and Don Brimage. The family will receive friends on Sunday, July 18th, from 6-8 PM at Brown’s Funeral Service in Durant. Mr. Usry was born in Bennington, Oklahoma on November 21, 1938 to Herbert and Myrtle (Tadlock) Usry. He passed from this life on Tuesday, July 13, 2021 in Durant, Oklahoma. Gerald attended Durant Public Schools and graduated with the class of 1957. After graduation, he attended Southeastern State College in Durant. While going to college, he was employed as a salesman for C.R. Anthony. Gerald began working for George Phillips at Phillips Garage on Main Street. There he would learn the trade of working on vehicles and becoming a mechanic. During his time at Phillips Garage, Gerald and Jeannie fell in love and married on January 12, 1962 in Durant. They have been blessed with four children and married over 59 years. In 1970, Gerald started the Usry Auto House on First Street, where he and his son Kendall still repair vehicles together. When they were not fixing cars, running the wrecker or restoring vintage rides you could find them drinking Dr. Pepper and eating cookies in the office. Gerald had many talents and interests such as carving wood. He has carved wooden cars, stools, vases, deer figures, and ducks. He also carved a wooden piano for his daughter Cynthia and had started carving carousel horses for his granddaughter. Gerald also has made wooden TV trays that family members still use today. Gerald had a knack for his many skills as he has rebuilt and restored antique cars and doing home repairs. Gerald was quick witted, had a great sense of humor and always had a story to tell. He and Jeannie are longtime members of Fairview Baptist Church. He was preceded in death by his parents; son Kevin Lynn Usry; and a grandson Devin Blake Usry. Gerald leaves behind his loving wife, Jeannie; son Kendall Usry; daughter Cynthia Armor and her husband Curtis; son Kyle Usry and his wife Shaunda, all of Durant; grandkids Tyler Usry, Lauren Armor, Dylan Usry, Evan Armor, Lance CPL Bryan Usry, Lance CPL Bryce Usry, Matthew Usry and his wife Allison, Larissa Armor, Tanner Davidson, Trista Davidson, Morgann Usry, Madison Usry and Cierra Usry; one great-granddaughter Claire Usry; sister Jacqueline Zimmerman of Georgetown, TX; brother Joe Dean Usry and his wife Sandy of South Jordan, UT; and several nieces, nephews and a host of good friends. Donations may be made to the American Heart Association in Gerald's honor. https://www.heart.org/?form=donate Online condolences may be sent to the family at [email protected] https://www.tributeslides.com/tributes/show/LLGRLC432QQFQTX6

Funeral services for Gerald Usry, 82, of Durant, will be held at 10:00 AM on Monday, July 19th, in Brown&#8217;s Funeral Service chapel with Bro. Jimmy Moore officiating. Interment will follow at Highland Cemetery with his grandsons Tyler Usry,... View Obituary & Service Information

The family of Gerald Usry created this Life Tributes page to make it easy to share your memories.

Funeral services for Gerald Usry, 82, of Durant, will be held...

Send flowers to the Usry family.