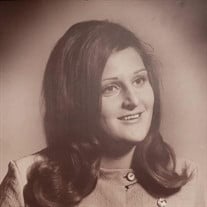 Glenda Sue Schammerhorn entered this life at 7 a.m. November 13, 1949 in Shawnee Oklahoma, born to William Robert Campbell and Billee Joee Campbell. She went to be with her Lord and Savior on Saturday, March 27, 2021 about 1:30 p.m. at the age of 70 years, 4 months, and 14 days. At the age of 15, Glenda was saved at the Falls Creek Baptist center while attending a youth retreat. She attended school at Bethel Acres, Oklahoma, graduating in 1968. She attended college at Murray State College for two years and Southeastern Oklahoma University where she graduated with a B. S. in Home Economics on May 26, 1972. She married Jim Schammerhorn on May 28, 1972 at Blackburn Chapel in Bethel acres. They lived together in Tishomingo, Oklahoma for 48 years. Glenda became a skilled cake decorator and opened a business called the Candlelight Cakery on Main Street in downtown Tishomingo in 1975. She specialized in decorating cakes, making hundreds of magnificent wedding cakes, taking the utmost care in every detail. She enjoyed playing tennis with friends, and even played in several local tournaments. Glenda loved to joke and tell stories while playing cards and games. She was very competitive! In 1975 Glenda and Jim joined Calvary Baptist Church in Tishomingo and served faithfully for many years. They had their first child, James E. III, on May 19, 1983. He resides in Banks, OR with his wife, Melody. Their second child, Lydia Melissa, was born January 18, 1985. She resides in Silt, CO with husband, Michael. During the summers Glenda and Jim would stay at their cabin in Tin Cup, Colorado enjoying the fellowship of many friends and family that came to visit each year. She learned to really enjoy tent camping and Jeeping the high country. She was thrilled to have company, especially her grandchildren. She loved spending time with the grandkids and teaching them her favorite hobbies, including, card making, coloring, and wood burning. Glenda was the second oldest of eight children with three sisters, Francis, Janis and Joy, and four brothers, Robert, David, Richard, and Ernie. Glenda is preceded in death by her parents Robert and Billee Campbell, and siblings Robbie, Francis, and David. She is survived by her devoted husband Jim, children James and Lydia, grandchildren Isaac, Emily, Aubrey, and Grady, and by her siblings Janice, Joy, Richard and Ernie. https://www.tributeslides.com/tributes/show/S96NLCQNL8372NQS

Glenda Sue Schammerhorn entered this life at 7 a.m. November 13, 1949 in Shawnee Oklahoma, born to William Robert Campbell and Billee Joee Campbell. She went to be with her Lord and Savior on Saturday, March 27, 2021 about 1:30 p.m. at the age... View Obituary & Service Information

The family of Glenda Sue Schammerhorn created this Life Tributes page to make it easy to share your memories.

Send flowers to the Schammerhorn family.