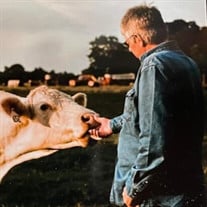 Glenn James Wilson of Albany, OK passed away on February 2, 2022, at his home at the age of 61. Glenn was born on March 12, 1960, in Durant, OK to parents James Ralph and Imogene (McGee) Wilson. A lifelong resident of Bryan County, Glenn graduated from Yuba High School and has been a rancher all his life. He married Sonja Burns on August 16, 2017, in Madill, OK. He was a volunteer firefighter with Albany FD and was a member of Millwright Local #1421. He loved the ranching life and he enjoyed working his cows, hunting, fishing, and shooting, but most of all he had a deep love for family and friends. Glenn is preceded in death by his father James Ralph Wilson, sister Linda Wilson and grandparents Laura and Oscar McGee and Rilla and Ray Wilson. Loved ones left behind to carry on Glenn’s legacy are his wife Sonja Wilson of the home; mother Imogene Wilson of Albany, OK; children Micah Wilson and spouse Steve of Sherman, TX, Jami Clay, and spouse Randall of Albany, OK, Derick Burns and spouse Jacee of Durant, OK and Justin Burns and spouse Maurica of Chester, NE; grandchildren Lakyn and Haisley Clay, Bennett, Baylor, Baker, and Bex Burns and Corbin Burns; sister Diannia Allen and husband Tommy of Albany, OK; brother Ray Wilson and special friend Carrie McBride of Albany, OK and numerous extended family and friends. A celebration of Glenn’s life will be held at 10:00 AM Monday, February 7, 2022, at Albany Baptist Church. Bro. Clark Harp will officiate. Pallbearers will be Mike Carlton, Mike McIntire, Jerry Heflin, Weldon Heflin, Bub Allen, Robert Self, Brian Wilson, Bradley Wilson, Chris Wilson, and Terry McGee. Honorary pallbearers will be Joe Wilson, Bennie Adams, and Richard Wilson. The family will receive friends at the Funeral Home on Sunday afternoon from 2-4 PM. In lieu of flowers, the family request memorials be made to the Wade-Albany Senior Citizens Center. Condolences may be sent to the family at www.brownsfuneralservice.com. Arrangements are under the direction of Brown’s Durant Funeral and Cremation Service. https://www.tributeslides.com/tributes/show/DP3LPYY5K2H3HK3S

Glenn James Wilson of Albany, OK passed away on February 2, 2022, at his home at the age of 61. Glenn was born on March 12, 1960, in Durant, OK to parents James Ralph and Imogene (McGee) Wilson. A lifelong resident of Bryan County, Glenn graduated... View Obituary & Service Information

The family of Glenn James Wilson created this Life Tributes page to make it easy to share your memories.

Send flowers to the Wilson family.