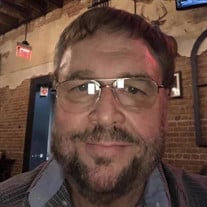 On Saturday, November 13th, Harold Wayne Bledsoe left this world to be with his Heavenly Father. Wayne was a beloved son, brother, husband, father, and papa, who passed from this life to his eternal life at the age of 68. Harold Wayne Bledsoe was born in Bonham, Texas on December 21, 1952. He grew up in Van Alstyne, Texas and spent his young adult years in Bonham. Harold Wayne had a sense of humor that would light up the room. From childhood throughout his life, he was always the life of the party. Wayne loved to sell Rainbows and was a “Professional Driver”, as he liked to put it. Wayne’s laugh was contagious and easy to catch. He was always telling jokes and pulling pranks on his friends and family. Wayne married Debbie Bledsoe on September 28, 2013 in Mead, Oklahoma. Harold Wayne was preceded in death by his mother, Flossie Marie Embry and his first-born son, Daniel Wayne Bledsoe. Wayne is survived by his wife - Debbie Bledsoe; father- Harold Bledsoe; siblings- Brenda Bledsoe-Adams, Vicki Crawford & Terri Bledsoe-Manning; children- Tina Bledsoe-Paxton, Jessy Bledsoe, Judson Bledsoe, Jessica Alexander-Cox, Melissa Alexander-Tucker, and Jeremy Alexander. Wayne had 6 kids and 15 grandkids who call him the most fun and funniest Papa. He also ensured everyone knew how much he loved Mia, his beloved dog. Harold Wayne Bledsoe is a man to be missed. He has joined our Father and we will see him in our everlasting life. “Do not let your hearts be troubled. Believe in God and trust in Him, believe also in Me. In My Father’s House are many dwelling places. If it were not so, I would have told you, because I am going there to prepare a place for you. And if I go and prepare a place for you, I will come back again and I will take you to Myself, so that where I am you may be also. And where I am going, you know the way.” – John 14:1-4 A celebration of Harold Wayne Bledsoe’s life will be held at Emmanuel Baptist Church in Mead, OK on Wednesday, November 17th at 1:00pm. Family night will be held at Brown’s Funeral Home on Tuesday, November 16th from 6:00pm- 8:00pm. The family sends a special thank you to the pallbearers: BJ Keeling, Brendan Adams, Collin Canada, Dusty Miller, Josh Adams, Randall Phelps, Chad Phelps and Tyler Thompson. https://www.tributeslides.com/tributes/show/4R9RR3HL6BWDGJRB

On Saturday, November 13th, Harold Wayne Bledsoe left this world to be with his Heavenly Father. Wayne was a beloved son, brother, husband, father, and papa, who passed from this life to his eternal life at the age of 68. Harold Wayne Bledsoe... View Obituary & Service Information

The family of Harold Wayne Bledsoe created this Life Tributes page to make it easy to share your memories.

Send flowers to the Bledsoe family.