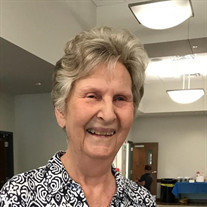 Helen (Willingham) Stallings-Hardy passed away on Tuesday, April 6, 2021 in Tishomingo, Oklahoma at the age of 90. Graveside services will be held at 10:00 AM Thursday, April 8, 2021 at Tishomingo Cemetery. Ron Hutchings will officiate. Pallbearers will be Orrin Walters, Josh Claborn, Cody Willingham, Scott Hutchings, Will McDaniel and Jared Pigg. Helen was born to George and Eula Willingham on February 26, 1931 in Devol, OK. She began school in Devol and later moved to Powell, OK. Her family moved to Enterprise in 1939. She graduated from the eighth grade and began her high school career at Coleman where she graduated in 1948. Helen and C.R. “Hoot” Stallings married on November 25, 1950. They had two children Jesse Stallings and Virginia Stallings. Helen and Hoot lived in many areas during their marriage due to his work in the oilfield. They moved back to Tishomingo in 1969 where he operated a casing business until his death on August 28, 1984. Helen went back to school and graduated with her LPN license in 1969 at Woodward, OK. Helen married Dan Hardy on November 18, 1985. They enjoyed traveling and lived in Durant until Dan’s death on November 4, 2001. Helen moved back to Tishomingo in 2006. Helen stayed active doing a variety of volunteer work. She volunteered at the Tishomingo hospital gift shop, blood bank and the election board. She loved to bowl and was quite good at it, often bowling a 200 game. Her great love was her family. She took great pride in her grandchildren and great grandchildren. She was a very important person to all her nieces and nephews. Church was an important part in her life and she faithfully attended the Church of Christ on Muldrow street in Tishomingo. Preceding her in death were her parents, George and Eula Willingham, her daughter, Virginia Stallings, a grandson, her husbands Hoot Stallings and Dan Hardy, and brother-in-law John Gage. Survivors include her son Jesse Stallings and his wife Jackie, granddaughters Jessa Davidson and husband Joe and Celina Bates all of Tishomingo, grandson Michael Stallings and wife Christie of Krum, TX, great grandchildren Alex and Ben Davidson, Conner Bates and Michaela and Cora Stallings, brothers Dean Willingham and wife Letha of Arlington, TX, Don Willingham and wife Larue of Coleman, OK and Gene Willingham and wife Edda of Tishomingo, OK sisters Betty Gage of Gainesville, TX, Nita McDaniel and husband Jerry of Coleman, OK and Lois Mitchell and husband Larry of Ardmore, OK and numerous nieces, nephews, extended family and friends. Condolences may be sent to the family at www.brownsfuneralservice.com. Arrangements are under the direction of Brown’s Durant Funeral and Cremation Service.

Helen (Willingham) Stallings-Hardy passed away on Tuesday, April 6, 2021 in Tishomingo, Oklahoma at the age of 90. Graveside services will be held at 10:00 AM Thursday, April 8, 2021 at Tishomingo Cemetery. Ron Hutchings will officiate. Pallbearers... View Obituary & Service Information

The family of Helen Fay (Willingham) Stallings-Hardy created this Life Tributes page to make it easy to share your memories.