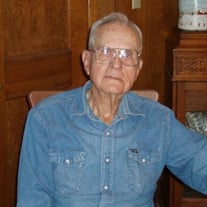 Hugh Franklin Downey peacefully passed away on Sunday, August 1st, 2021 with his family by his side. He was born on April 20, 1924 near Ringgold, Texas to Benjamin Franklin and Honor (Mayfield) Downey while his father was employed on a cattle ranch there. He lived a long life of 97 years, three months and 12 days. On October 14, 1943, Hugh entered the United States Army while serving his country in the Philippines and Austria. Hugh married the love of his life, Pansy Lou Beauford on June 18, 1950 in Henrietta, Texas. In1952, he went on to Officers Candidate School and finished 2nd out of 200. In the next 27 years while serving his country, he went on tour in Japan, returned to Ft. Sill, Oklahoma, then to Verdun, France back to Ft. Sill, OK. Then Hugh went to Vietnam and from there to Ft. Huachuca, Arizona and finally retired on August 1st, 1970. After retiring, he returned to Durant, Oklahoma and bought 120 acres in Roberta and enjoyed raising cattle, horses, chickens, hay, and gardening. Hugh also enjoyed being with his family, guns and hunting. The most important things in his life were his family and serving his country. He did with honors and will always be loved and remembered. You made us so proud Lieutenant Colonel Hugh F. Downey (Daddy). Hugh is preceded in death by his wife, Pansy before her passing on October 26, 2003, daughter Jalaine Helton of 2015, father Benjamin Franklin Downey, mother Honor Mayfield Downey, brothers Elmor and Benny Downey, and sisters Betty Downey and Martha Blalock. Hugh is survived by his daughter Robin E. Jarratt and husband John “Bo” of Durant, Oklahoma, grandson Hugh Ezra Hill and wife Dr. Tram Hill of Frisco, Texas, grandson Desmond Lavern Signs and wife Ena of Atlanta, Georgia, and great grandchildren Jacob and Chloe Hill of Frisco, Texas. Funeral Services with full military honors will be held on Friday, August 6th, 2021 at 2:00 PM at Brown’s Funeral Service. Interment will be held at Highland Cemetery in Durant, Oklahoma. Pallbearers will be provided by the United States Army Honor Guard. Honorary Pallbearers will be Gurley Mattingly, Dakota Graham, Mike Pickett, Donnie Zachary, Jeff Shelburne, and Johnny Wilkerson. Family Hour will be Thursday, August 5th, 2021 from 6-8:00 PM at Brown’s Funeral Service Chapel. Condolences may be sent to www.brownsfuneralservice.com. Arrangements are under the directions of Brown’s Funeral Service in Durant, Oklahoma. https://www.tributeslides.com/tributes/show/L5NCQNL8C377BPXR

Hugh Franklin Downey peacefully passed away on Sunday, August 1st, 2021 with his family by his side. He was born on April 20, 1924 near Ringgold, Texas to Benjamin Franklin and Honor (Mayfield) Downey while his father was employed on a cattle... View Obituary & Service Information

The family of Hugh Franklin Downey created this Life Tributes page to make it easy to share your memories.

Send flowers to the Downey family.