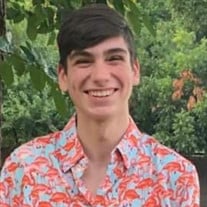 Jack Thomas Sarver died on 5/25/2020 at the age of 15. He was a native of Lafayette, LA, born on 2/1/2005. He and his family moved to Durant in July 2015. He was an avid LSU and N.O. Saints fan and carried an Alvin Kamara book bag. His quick sarcastic wit kept his family and friends always on their toes. If Jack knew he was right, he fiercely defended his belief. Jack had many goals, such as he wanted to be taller than Jordan Gregory. He was determined to go to Harvard to become an orthopedic doctor in the field of sports medicine. In his spare time, Jack enjoyed gaming and playing sports with his friends. He loved fishing, camping, and riding jet skis and hanging out in the pool at home with his friends. Jack was an active member of Fusion Bible Church Durant’s Youth Program. He was looking forward to his sophomore year at Durant High School where he was a dedicated student and athlete. Jack excelled in his education and achieved a position in the Top 10 percent of students in the state of Oklahoma. He was a member of several clubs and organizations that include; The Key Club, The Academic Team, FCA, tennis, basketball and the Honors Program. He is preceded in death by his paternal grandmother, Helen Trahan, maternal grandparents Jack and Virginia Holt and uncles, Jerry Rhodes and Tommy Holt. Family left to cherish his memory are his parents Lee and Sherrie Sarver; siblings, Stefan, Seth, and Sofie Sarver; paternal grandparents, Ronald and Jeanette Sarver; aunts, Kathleen Rhodes, Cecile Holt, Missy Sonnier, and Mandy Cooper along with other extended family members and many dear friends. Services will be held 2:00 PM Wednesday, June 3, 2020 at Fusion Bible Durant with Pastor Joel Engle and Jordan Gregory officiating. Cremation will follow. Pallbearers are Kaden Danderson, Keionte Turner, Camdon Cooper, Cutter Whitfield, Coach Kyle Lowe, Michael Rhodes, Stefan Sarver and Seth Sarver. Honorary pallbearers are Fernando Flores Jr, Hunter Ford, and Kaleb Foster. The family will accept friends Tuesday evening from 6:00 PM – 8:00 PM at the funeral home. Durant Lion colors are requested to be worn at the service. Donations can be made to the Southwest Transplant Alliance in Jack's memory. Online condolences may be made to the family at brownsfuneralservice. Com Services are under the direction of Brown’s Durant Funeral and Cremation Service.

The family of Jack Thomas Sarver created this Life Tributes page to make it easy to share your memories.

Send flowers to the Sarver family.