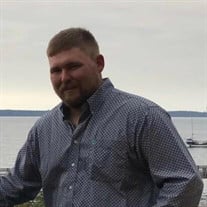 James Jackson Cross III, 30 of Madill, Oklahoma passed away alongside one of his best friends, Jordan Lloyd Stowers on Monday, October 25, 2021. Jackson was born on September 16, 1991, in Ardmore, Oklahoma, to the late James Jackson Cross II and Janet Sue Fuller. Jackson was raised in Madill and attended Dickson Schools where he was a Dickson Comet and graduate of the class of 2010. Jackson was currently attending college at OSU-IT in Okmulgee, Oklahoma, majoring in Construction Management. Jackson loved his momma Janet, his son Briton and all his family and friends. He had a special bond with his chocolate lab, Jacy. He loved hunting, fishing, spending time with his buddies and most of all he loved to make people laugh. Jackson was always the life of the party. Jackson was spoiled and ornery from day 1, he was the baby brother of two teenagers, the late Jeromy Dan Chaffin & Summer Danielle Chaffin-Pense. His childhood was spent being spoiled by Jeromy and Regena and disciplined by Summer. In high school, Jackson played football for the Dickson Comets and excelled at everything he tried. He had an amazing personality, the gift of gab, the kindest heart, and the greatest sense of humor. He lit up every room he entered with his big ornery smile. You never knew what Jackson had up his sleeve, just ask Summer, Regena, Bailey, Trey, or his son Briton James Cross. Jackson never met a stranger who wasn’t soon his friend. He never called anyone by their actually name, everyone got a random name. Jackson had many, many friends, his best friends were Brad, Forrest, Chris, Justin, and the late Stow Chow. Jackson was the best son, brother, uncle, friend, and most of all a dad to his precious son, Briton James Cross. Jackson loved working with his hands, therefore most of his adult life was spent working in the oilfield. There are thousands of hilarious stories we could talk about Jackson and his many adventures. He is survived by: Son: Briton James Cross, Madill, Oklahoma Parents: David & Janet Fuller, Madill, Oklahoma Sister & Brother in-law: Eddie & Summer Pense, Mannsville, Oklahoma Niece & Nephew: Bailey & Trey Gammill, Madill, Oklahoma Sister in-law: Regena Chaffin, Madill, Oklahoma He was preceded in death by his father, James Jackson Cross II, his brother, Jeromy Dan Chaffin, Grandparents: James Jackson & Helen Cross, Wilburn & Helen Carter, and Margaret Doan. Casket Bearers: Trey Gammill, Brad Avery, Forrest Gillespie, Christian Gillespie, Justin White, and Michael Carter Honorary Bearers: Dickson High School Class of 2010 Officiating: Michael Caraway Interment: Woodberry-Forest Cemetery https://www.tributeslides.com/tributes/show/YX8SP8N5HWZGST7K

The family of James Jackson Cross III created this Life Tributes page to make it easy to share your memories.

James Jackson Cross III, 30 of Madill, Oklahoma passed away alongside...

Send flowers to the Cross family.