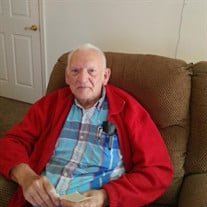 James Westley Williams, age 77 passed away peacefully on February 18th 2021 at 7:18pm in Durant Oklahoma. He was born August 11th, 1943 to Noble Luther and Mildred Frances Williams of Hobart, OK. He attended school at the Sulfur school for the Deaf from 1st grade to 12th and graduated in 1964. While attending school, James played football and after graduation went back to assist in coaching. He married Naomi Ruth Williams on September 8th, 1972 in Madill, OK and they were married 31 years when she passed away on September 25th 2003. James quit his job and took care of his wife while she was sick for the last few years of her life and was a wonderful husband and a blessing in her life. James and Naomi lived in Caddo, Madill and Durant Oklahoma where they raised their family together. He was a member of the Durant Church of Christ for the last 10 years and enjoyed the services which were interpreted in sign language by Barbara and Mickey Davis. James worked at the Choctaw Casino in Durant as a Steward in Food services for almost five years. He loved his work family and being around the guest. He was selected as Simply the Best in February 2018. The Choctaw Nation took him in as part of their extended work family. He loved to watch Oklahoma Sooners and all College and NFL football games. He loved to travel with his wife and go to church and deaf conventions. He always read the newspapers to keep up on current events and loved spending time with his family and friends. He enjoyed going to the Senior Center in Durant for lunch and visiting with everyone. Thank you Jackie Garner for checking on him when he was not there. He had the best neighbor, Gladys McCandless who he lived next door to him for 7 years at Larkspur Village. She always checked in on him and brought him home cooked meals. Thank you so much for being a wonderful neighbor to him. Thank you to all the Durant Davita Dialysis Staff, Nurses and Physicians for taking care of him and to all his healthcare providers for the care you gave him. He is preceded in death by his parents, Noble Luther and Mildred Frances Williams, his brother, Leroy Luther Williams, his loving wife, Naomi Williams and his step-daughter, Ruthie Williams. He is survived by, his sister, Dolores Adkison of Oklahoma City, his brother, Bill Williams of Madisonville, Kentucky, his Step-children, Patsy Coker of Midlothian Texas, Wayne Willis of Mena Arkansas, Danny Willis of Gladewater Texas, Connie Prater of Durant Oklahoma, Billy Willis of Glen Burnie Maryland and Martha Woodruff of Denison Texas and several grandchildren, great grandchildren, nieces and nephews. James was a kind and loving spirit who was loved by all who met and knew him and will be deeply missed. We will cherish and keep the memories we had with you close to our hearts. His final resting place will be next to his wife Naomi Williams at the Gethsemane Cemetery in Caddo Oklahoma. A Celebration of Life Service will be held at the Durant Church of Christ, located at 5312 N First Avenue in Durant ,Oklahoma on April 17th at 1pm in the Fireside Room, parking will be on the East side of the building. Family and Friends please join us in Celebrating his Life. This memorial page will be online at Brown’s Funeral Home Website for anyone to post special memories of him.

James Westley Williams, age 77 passed away peacefully on February 18th 2021 at 7:18pm in Durant Oklahoma. He was born August 11th, 1943 to Noble Luther and Mildred Frances Williams of Hobart, OK. He attended school at the Sulfur school for... View Obituary & Service Information

The family of James Westley Williams created this Life Tributes page to make it easy to share your memories.

Send flowers to the Williams family.