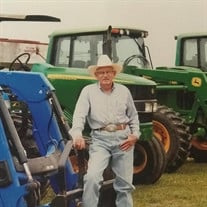 “Once a Cowboy Always a Cowboy” Jeff Brown age 88 of Silo, OK passed away on Thursday, October 15, 2020 in Sherman, TX. Jeff was born on February 15, 1932 in Carlsbad, NM to Charley and Ruby Ella (Potter) Brown. Jeff moved with his family to Sardis, OK at the age of two. He graduated from Tuskahoma High School in Tuskahoma, OK and later married Cumi Jennifer Standefer on March 24, 1951. Together untied as one they began their family and Jeff started his life as a cattleman. In 1976 they moved to Silo and Jeff continued his cattle business for 44 years up until his death. He was a member of Caddo Presbyterian Church and board member of NRCF and Bryan County Cattleman’s Association. He was involved in the Sam’s Camping Club, Paint Horse Association and the Elks Lodge Square Dancing Club. He enjoyed working on his cattle ranch and he had a deep love for family and friends. Jeff was preceded in death by his parents; brother Pat Brown; sister Bonnie Goforth; and son in law Burl Burkett. Jeff is survived by his loving and devoted wife of 69 years Cumi Jennifer Brown; daughter Carla Brown Burkett; son Jeffrey Brown and wife Sharon and son David Rowe; grandchildren Ryan Wickersham, Darren Wickersham, Sharleen Rezner and husband Jeremy, Erin Rowe and Judson Rowe and 10 great grandchildren. Special friends Sam Adams, Gayland Townsend, Don Huddelston, Buddy Wilson, and Tim Oneal, just to name a few. Services to celebrate Jeff’s life will be held at 2:00 PM Sunday, October 18, 2020 at Highland Cemetery Pavilion. Pastor Sammie Adams will officiate. Interment will follow in Highland Cemetery with Ryan Wickersham, Darren Wickersham, Jeremy Rezner, Jackson Rezner, Garydavid Reese and Tim O’Neal serving as pallbearers. Condolences may be sent to the family at www.brownsfuneralservice.com. Arrangements are under the direction of Brown’s Durant Funeral and Cremation Service.

The family of Jeff Brown created this Life Tributes page to make it easy to share your memories.

Send flowers to the Brown family.