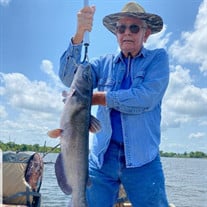 Jerry was born Saturday, April 27, 1940 in Durant, Oklahoma to Louis and Faye (Campbell) Rowland and departed this life on Monday, August 30, 2021 from his Caddo residence at the age of 81. Jerry was raised and attended Caddo Public Schools. He married Brenda Ammons on September 28, 1963 in Armstrong, Oklahoma and have been blessed with almost 58 years of marriage. Jerry was a veteran, serving with the United States Army and Army Reserves for a total of six years. Jerry was employed as a state engineer for 33 years with the Texas State Highway Department. After his retirement, he and Brenda made their home outside of Caddo so that he could ranch and tend to his cattle. They are members of the First Church of the Nazarene in Caddo, Oklahoma. Jerry was preceded in death by his parents. He is survived by his wife, Brenda, of the Caddo home; daughter, Jerrilynn Creed and husband, Jamie, of Tampa, FL; son, Jeff Rowland and wife, Terri, of Caddo, OK; grandkids, Jessica Molnar and husband, Joe, of Orlando, FL, Jordan Creed and Tyler Stewart of Tampa, FL, Jarrett Rowland of Oklahoma City, OK, Jalissa Rowland of Denton, TX, and step-granddaughter, Shawna Wells of Ada, OK; three brothers, Kenneth Rowland and wife, Judy, David Rowland and wife, Wanda, and Michael Rowland and wife, Marty, all of Caddo, OK; one sister, Donna Jobe and husband, Noble, of Eufaula, OK; along with many nieces, nephews and good friends. Graveside services will be held at 10:00 AM on Friday, September 3, 2021 at Gethsemane Cemetery in Caddo, Oklahoma with Bro. Clifford Joines officiating. Serving as pallbearers will be Shawn Rowland, Brian Campbell, Maxey Rowland, Jarrett Rowland, Blake Nickelson and Evan Rowland. Online condolences may be sent to the family at www.brownsfuneralservice.com.

Jerry was born Saturday, April 27, 1940 in Durant, Oklahoma to Louis and Faye (Campbell) Rowland and departed this life on Monday, August 30, 2021 from his Caddo residence at the age of 81. Jerry was raised and attended Caddo Public Schools.... View Obituary & Service Information

The family of Jerry E. Rowland created this Life Tributes page to make it easy to share your memories.

Send flowers to the Rowland family.