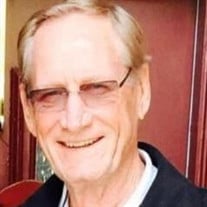 Jerry Franklin Shipp entered this life on Friday, September 27th, 1935 in Shreveport, Louisiana, the biological son of Wint and Annie Mae Wafford. He went to his Eternal home on Tuesday, October 5th, 2021 from Denison, Texas at the age of 86.... View Obituary & Service Information

The family of Jerry Franklin Shipp created this Life Tributes page to make it easy to share your memories.

Send flowers to the Shipp family.