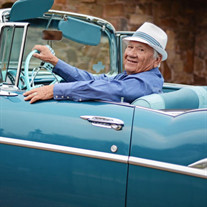 Jessie Lee Thomas left this life on February 2, 2021 at the age of 86. He was born in Telephone, TX to Jesse William Thomas and Eva (Gaither) Thomas on August 24, 1934. A funeral service will be held at 2:00 PM Saturday, February 6, 2021 at Brown’s Funeral Home in Durant, Oklahoma with Ross Phillips officiating. Burial will be in Bokchito Cemetery in Bokchito, Oklahoma. Jessie was a member of the Masonic Lodge #253 and earned his 50 year pin on May 4, 2015. A Masonic Committal Ceremony will be performed at the graveside. His pallbearers will be Ricky Hall, Sean Cooper, Anthony Cabaniss, Jeff Hamill, Eddie Reeder, and Chris Bundrant. Honorary pallbearer will be Jerry Sheffield. Jessie Lee attended school at Bennington and Smith Lee. At a very early age, Jessie developed his strong work ethic and worked many jobs in his lifetime. There wasn’t much he didn’t do. His first job was at a cotton gin in Lockney, Texas. He married the love of his life, Lillian Etta Gower on December 19, 1953 in Sherman, TX. They moved to Dallas, Texas where Jessie took a job with the City of Dallas in the Water Department. He also drove a cab and did various other side jobs while in Dallas. They had their sons David and Danny while living in Dallas. He and his family moved back to Bokchito in 1969 and he was a welder at Peabody Galion and started the first rural garbage service in Bryan County, Thomas and Sons. He owned and operated a pool hall , owned Shady Grove Convenience Store and also had a used car lot that he operated beside it in Bokchito. He opened D & J Muffler Shop in Durant, Oklahoma where he worked with his son Danny. He also owned Last Dollar Loan Company in Durant, Oklahoma. All the while that he was working, he was acquiring rental property. He loved to buy a property and fix it up or build a building on it. His rental property business was also called Thomas and Sons and he had both sons David and Danny to help him. Lillian was also a big part in his success keeping all the books for his many businesses. He never really retired and the “last” building he would build would never really be his last. He would set a goal, meet it, and then not be satisfied until he had another goal. He never really retired and always loved to work. He also loved antique cars and owned many of them. He loved to buy them, fix them up, drive them around, and drive others around in them. When asked what car was his favorite, he would say that all of them were his favorites. Jessie Lee was preceded in death by his parents, Son, David Thomas, Infant Grandson, Trent Thomas, Brothers, Cecil Thomas, Johnny Thomas, Billy Thomas, Charles Thomas, and Sister LaVern Calhoun. Jessie Lee is survived by his wife of 67 years, Lillian Thomas, of the home. Son, Danny Thomas of Bokchito, Oklahoma, Granddaughter, Leslie Spencer and husband Cody of Bokchito, Oklahoma, Great grandchildren, Rachel and Sam Spencer of Bokchito, Oklahoma, Daughter-in-law, Connie O’Brien and husband George of Bokchito, Oklahoma, Brothers, Ray Thomas and wife Rozell of Denison, Texas, Darrell Thomas of Stringtown, Oklahoma, Donnie Thomas and wife Susan of Eustace, Texas, Sister, Mattie Pebworth and husband Jerry of Eustace, Texas, Aunt, Marie Griffin of Florida, and numerous nieces, nephews, and cousins. Condolences may be sent to the family at www.brownsfuneralservice.com. Arrangements are under the direction of Brown’s Durant Funeral and Cremation Service. https://www.tributeslides.com/tributes/show/H8H2PHWM7L9PFND3

The family of Jessie Lee Thomas created this Life Tributes page to make it easy to share your memories.

Send flowers to the Thomas family.