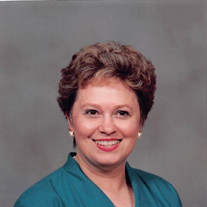 JoAnn Howard was born into this world on June 17, 1933, to Otis and Idell Hay Keener. JoAnn departed this world on February 15, 2021, at the age of 87. She was born and raised in Durant, Ok, where she became a teacher and later married Bob... View Obituary & Service Information

The family of JoAnn Howard created this Life Tributes page to make it easy to share your memories.

Send flowers to the Howard family.