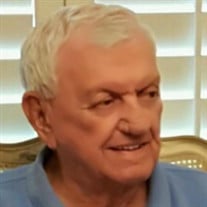 Joe Wheeler Barker, 91, passed away at 10:45 am on Monday, November 23, 2020 in Denison, TX after a brief illness. Born in Stilwell, OK , May 14, 1929 to Bill and Maude Bigby Barker, the family moved to McAlester where his father was a Deputy U.S. Marshall. Later he moved to Durant, graduating from Durant High School where he played football and basketball. Following graduation, he joined the Air Force (1947-1951) where he toured Europe playing on the Air Force basketball team. He attended Oklahoma A&M in Stillwater (member of the last graduating class before changing name to Oklahoma State University). Following graduation, he returned to Durant where he married Kathryn (Fritz) Stone. She died following a long illness 3 years later. He purchased Stone’s Propane in Durant where he and his partner, W.D. Manaham (Dub) of Tulsa owned and operated for 47 years. Dub and his wife Marty introduced him to his future wife, Mecy Kate Andrews of Tulsa. They were married in 1961 and had two children, Doug and Kim. The were members of the First Christian Church where he was a lifetime deacon and served as Trustee and many church boards and committees. He served on the Board of Directors of the former Durant Bank & Trust and also served on the Oklahoma State LP Gas Association Board. He was an avid golfer and also cherished his horseracing trips to Hot Springs, AR with Mecy and their expansive group of racing friends. He was preceded in death by his parents Bill and Maude Barker; step mother Thelma Barker; sisters Roxie Robbins, Kathryn Baker Caldwell and step sister Betty Jarrett; brothers -in-law Glenn Robbins, Dr. George Baker, Ed Caldwell and Pat Jarrett. Survivors include his wife Mecy of the home; son Doug and wife Kellie Butcher Barker of Durant and daughter Kim of Dallas, TX as well as brothers-in-law Tom Andrews and wife Mary Kay of Norman, OK and many nieces and nephews. Grandchildren include Weston of NYC and Miranda of Washington, DC. A celebration of Joe’s life will be held at 2:00 PM Friday, December 4, 2020 at the First Christian Church. Pastor Joe Jorgensen will officiate assisted by Mr. Dell McClain. In lieu of flowers, the family requests memorial contributions be made to the First Christian Church of Durant. Condolences may be sent to the family at www.brownsfuneralservice.com. Arrangements are under the direction of Brown’s Durant Funeral and Cremation Service.

Joe Wheeler Barker, 91, passed away at 10:45 am on Monday, November 23, 2020 in Denison, TX after a brief illness. Born in Stilwell, OK , May 14, 1929 to Bill and Maude Bigby Barker, the family moved to McAlester where his father was a Deputy... View Obituary & Service Information

The family of Joe Wheeler Barker created this Life Tributes page to make it easy to share your memories.

Send flowers to the Barker family.