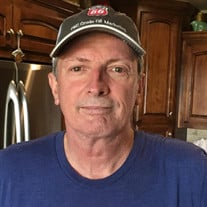 Joey Kent Wakefield was born Thursday, August 22, 1957 in Denison, Texas to Joe Wakefield and Glenda (Moody) Hutchinson. He passed from this life on Saturday, January 29th, 2022 in Calera, Oklahoma at the age of 64. Joey is a graduate of Calera High School with the class of ’75. He married Melissa Knight on October 30, 1976 in Borger, Texas. Joey furthered his education at Frank Phillips Jr. College, Murray State College, University of Oklahoma, and then at Oklahoma City University where he earned his Masters degree in Business Administration. In high school and college, Joey was a gifted athlete and excelled at both basketball and baseball, earning numerous awards for his accomplishments, a notable award being a 1974-75 All American High School Basketball player and salutatorian of his graduating class. In 2006 Joey was inducted into the Bryan County Basketball Hall of Fame. Joey was employed with Phillips Petroleum over twenty years. He started with Phillips in Borger, Texas at the Philblack plant and in 1981 was transferred to Oklahoma City where he worked several positions including Reconnaissance Surveyor and Project Development Analyst. After leaving Phillips, he worked at Lowe’s for five years and then for Tiller Fence and Deck Company for two years before retiring. Joey was a board member with Focus Federal Credit Union in Oklahoma City for thirty years. Joey was an avid fan of OU football and OU softball. He enjoyed visiting and talking with his many friends. Joey always had a good time in everything he did and would do anything for his family and friends. He was preceded in death by his mother, Glenda Hutchinson; and his parents in law, Carla and Jack Knight. Joey leaves behind his wife, Melissa, of Oklahoma City; daughter, Darby Coats of Oklahoma City, with her daughters, Josslyn and Jillian; son, Jace Wakefield and his wife, April, of Oklahoma City, with their children, Simon Harry, Samuel Harry and Aurora Wakefield; father, Joe Wakefield and wife, Lynda, of Calera; sister, Julie Weger and husband, Ronnie, of Colbert; step brother, Will and wife Stefny Hutchinson of Oklahoma City; step brother, Michael Hutchinson of Calera; sister in law, Melia Melton of Norman; brother in law; CC Knight and wife Ann Elise of Granbury, TX, several nieces, nephews and good friends A memorial visitation will be held from 4-6 PM on Saturday, Feb. 5th, at Brown’s Funeral Home chapel in Durant. Online condolences may be sent to the family at brownsfuneralservice.com. Arrangements are under the direction of Brown’s Funeral Service, Durant.

Joey Kent Wakefield was born Thursday, August 22, 1957 in Denison, Texas to Joe Wakefield and Glenda (Moody) Hutchinson. He passed from this life on Saturday, January 29th, 2022 in Calera, Oklahoma at the age of 64. Joey is a graduate of Calera... View Obituary & Service Information

The family of Joey Kent Wakefield created this Life Tributes page to make it easy to share your memories.

Send flowers to the Wakefield family.