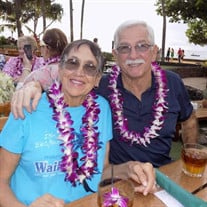 Tom Bean, TX- John William Wetzel, known as Bill to his friends and family as Bill, was born Sunday, June 15, 1941 in Sherman, Texas to J.C. Wetzel and Vera Marie (Smith) Wetzel and passed from this life on Sunday, September 26, 2021 from his home in Calera, Oklahoma. John was a 1959 graduate of Whitewright High School. After high school, Bill served with the United States Army for two years and was a proud Vietnam Veteran. Bill was a Specialist 4th Class, Expert Marksman, and member of the Engineering Corps. After being discharged from the Army, Bill got his associates degree in Applied Science from Grayson County College. He was a hard-working man and worked many manufacturing jobs before finding his home at Texas Instruments- where he met his wife Jane Brown who he married April 1st, 1987 in Bokchito, Oklahoma. He retired from Texas Instruments after 27 years. Bill was a man who never met a stranger. It didn’t matter if he knew you for 5 minutes, 5 years, or his entire life, he was there to lend a helping hand. He loved children and old cars. He loved to spend time teaching kids to work on bicycles or cars. He loved teaching folks to swim. He could talk a person through about any project and if he couldn’t, he’d figure it out with you. Bill was a member of the Texoma Vintage/Classic Car Club and a Master Mason with the Whitewright Masonic Lodge. John was preceded in death by his parents; a sister, Margaret Ann Reed; son-in-law, Lenual Greenhaw; and bonus son, John Squires. He is survived by his wife, Jane, of the Calera home; son, Harold Edgar Townley of Calera, OK; daughter, Carla Greenhaw of Calera, OK; daughter, Seletia Towns and husband, Casey, of Blanchard, OK; son, John Brandon Wetzel and wife, Sarah, of Telephone, TX; daughter, LeAndra Townley and husband, Jeremy Kennedy, of Calera, OK; son, Jason Drew Wetzel of Bokchito, OK; daughter, Heather (Wetzel) Baker and husband, Wren, of Argyle, TX; bonus son, Greggory Underwood of Calera, OK; and bonus daughter, Lanee Carlisle also of Calera. He is also survived by his 14 grandchildren- Luke Hale, Kemari Hale, Brannan Love, Jace Love, Erika Greenhaw, Jonathan Greenhaw, Miranda Tijburg, Logan Tijburg, Ember Underwood, Isaac Wetzel, James Wetzel, Mary Heather Townley, Addisyn Baker, and Reagan Baker. Along with seven great-grandchildren, including one on the way and numerous “adopted” grandchildren near and far who grew up knowing him only as Papaw Bill. Funeral services to celebrate Mr. Wetzel’s life will be held at 2:00 PM on Wednesday, Sept. 29th, at Bethel Baptist Church in Whitewright, Texas with Bro. Eric Elliott officiating. Interment will follow at Cedar Cemetery in Luella with Jeff McKnight, Kelly McKnight, Brent McKnight, Keith Rowland, Craig Brantley and Kent Rowland serving as pallbearers. Honorary pallbearers will be Gregg Underwood and Ronal Brown. The family will receive friends from 6-8 PM on Tuesday, Sept. 28, at Brown’s Funeral Service in Durant. Online condolences may be sent to the family at [email protected] https://www.tributeslides.com/tributes/show/MY496458M2X9R38P

Tom Bean, TX- John William Wetzel, known as Bill to his friends and family as Bill, was born Sunday, June 15, 1941 in Sherman, Texas to J.C. Wetzel and Vera Marie (Smith) Wetzel and passed from this life on Sunday, September 26, 2021 from... View Obituary & Service Information

The family of John William "Bill" Wetzel created this Life Tributes page to make it easy to share your memories.

Send flowers to the Wetzel family.