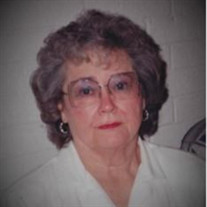 JUANITA BYRD CURRIE (92) was born October 5, 1927, in Wayside, Texas, the third daughter to Richard Brown Byrd and Euphemia LaGrone Byrd. She passed on to her reward on May 29, 2020, in Durant, Oklahoma, after a brief illness. Funeral services will be held on June 5, 2020, at 2 pm at Durant Church of Christ. Interment will be in Durant Highland Cemetery. Juanita attended school in Wayside and Silverton, with brief periods in New Mexico and California, and graduated from Happy High School in 1944. It was during that senior year in Happy that she met the love of her life, Corliss H. Currie. In a family of just daughters, she was the “son” that worked alongside her father “Brown” Byrd in the fields. She used that summer after graduation to make enough money to attend Draughn’s Business School in Lubbock. After a brief time of working for Western Union in Lubbock, she returned to Happy and worked at Happy State Bank. She used her business school training throughout her marriage to keep the books for the family farm and ranch. After Corliss returned from his time in the Pacific following WWII, she and Corliss married on June 5, 1947. 2020 would mark 73 years of being a helpmate to each other. They were blessed with two children—son Dwight Howard Currie and daughter Debra Juanita Shaw. Dwight and his wife, Jorja, have two children—Chad Howard Currie with wife Rhonda, all of Bennington, Oklahoma, and Amanda Wallis with husband Chris, of Allen, Oklahoma. Debra and her husband, Jim, have two daughters—Kelly Shaw Wheelock with husband Josh, and Amy Shaw Edwards with husband Dusty, all of Austin, Texas. There are 7 great-grandsons-- Graham Wheelock, Garrett Wallis, Brody Wallis, Bowie Edwards, Jude Wheelock, Gus Edwards, and John Wheelock, and 3 great-granddaughters—Madison Currie Collins, Kendall Wheelock, and Karoline Wheelock. Juanita has two surviving younger sisters in California—Yvondelle Lee and Vesta Voight. Juanita is preceded in death by her parents, a baby brother, and older sisters Nettie Faye Morgan and Novalene Toles. Juanita was the true definition of helpmeet. She cooked for hired hands—those that shared the house with them in the early years of marriage as well as those workers in the fields during harvest time or cowhands at roundup time. She always had a large garden and orchard that produced food for the freezer and table. She was as particular about her garden as Corliss was about his fields. She made all of her and Debra’s clothes and even made Dwight’s western shirts. Not getting much domestic training from her own mother, she saw to it that Debra was trained to cook and sew and keep a home from an early age. She was active in the Home Demonstration Club and served many years as the Happy coordinator for the 4-H Club youth. Juanita and Corliss were baptized at the same time, thanks to the teachings of George and Florene Pounds, Corliss’ sister and brother-in-law. They faithfully attended worship at the Church of Christ. Juanita taught Bible classes and faithfully filled the role of elder’s wife. Some of their happiest times were spent working with the college students at the Bible Chair supported by the 7th and Beech congregation in Durant. Juanita had quite the reputation as a great cook. When the Home Demonstration Club was raising money to buy a structure for a new community center, she made 70 pies to be sold for the effort. And those were pies from scratch—crust and all. Folks would follow her into the church fellowship hall with the question “what did you bring today?”. She rarely ever took home any leftovers. With her own parents living in California for all of her married life, she adopted Corliss’ parents as her own. She lovingly cared for AM and Jessie until their deaths. In 1965, when the senior Curries needed to be closer to medical care, they built a house on the western edge of Happy. Corliss and Juanita built a house right next door—they had always lived within a quarter mile of each other. Juanita worked hand-in-hand with the architect to design the house of her dreams. She used her sewing skills to make all the formal draperies for the new house. She enjoyed being hostess for many showers and wedding receptions. She probably hosted nearly all the town’s bridal showers from 1966-1969 when they lived in Happy. In June, 1969, she and Corliss moved permanently from Happy, Texas, to the ranch southeast of Bennington, Oklahoma. She was able to design a second dream home on the ranch in 1973. This house was home until she and Corliss moved into Durant for health reasons in April of this year. Through the years, Juanita tried her hand at a variety of skills in addition to her cooking, gardening and sewing. She was a house painter, an upholsterer, a toolsmith in copper and leather goods, a rug-weaver, a carpenter, a crossword aficionado. She was an avid reader and could devour a stack of library books in a single day. In the 1980s, she decided to try her hand at oil painting and became quite the artist. The house was graced with her paintings of scenes of old farmhouses and barns in the Bennington area. Juanita was the embodiment of Proverbs 31. “Her children arise and call her blessed; her husband also, and he praises her… Give her the reward she has earned, and let her works bring her praise at the city gate.” Prov. 31:28, 31. Memorials can be sent to these children’s homes that were special to her: Tipton .Children’s Home (Tipton, OK), Westview Boys Home (Hollis, OK) or High Plains Children’s Home (Amarillo, TX)

JUANITA BYRD CURRIE (92) was born October 5, 1927, in Wayside, Texas, the third daughter to Richard Brown Byrd and Euphemia LaGrone Byrd. She passed on to her reward on May 29, 2020, in Durant, Oklahoma, after a brief illness. Funeral services... View Obituary & Service Information

The family of Juanita Byrd Currie created this Life Tributes page to make it easy to share your memories.

Send flowers to the Currie family.