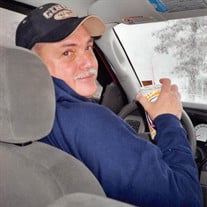 Kenneth Ray Compton was born Wednesday, November 25th, 1953 in Durant, Oklahoma to R.C. Compton and Letha M. (Moore) Compton. He passed from this life on Wednesday, February 2nd, 2022 at his Calera home at the age of 68. At a young age, Kenny grew up in many states traveling with his family for work. His dad was a plumber/pipefitter and worked all over the country. At the age of 13, Kenny was accidentally shot and has been in a wheelchair. Though he was in a wheelchair, Kenny never let it slow him down. He was always eager to do things that anybody else could do and always had a good attitude. As a teenager, Kenny loved driving fast cars and boats. His brothers can tell many stories about Kenny and how he enjoyed “living”. Kenny worked for the Durant Water Department for ten years, where he built meters and worked his way up to office manager. He would later work for Southeastern Electric Co-Op for twenty-six years retiring as the head cashier. Kenny enjoyed watching western TV shows such as Gunsmoke, and Barnwood Builders. He was an avid fan of OU football and rooting for his team. Kenny loved being outdoors, mowing his lawn, riding four wheelers and bow hunting. Kenny married Judy Whisman on April 27th, 1989 in Durant, Oklahoma. Together, they were passionate about spending time with family and going camping. They attend the First Church of the Nazarene in Durant. He was preceded in death by his parents and grandparents. Kenny is survived by his wife, Judy, of Calera; children, Tony Argo and wife, Rhonda; daughter, Renae Henderson and husband, Kenneth; Todd Argo; and Max Argo and wife, Jana, all of Caddo, OK; grandchildren, J.T. Argo, Jacob Argo, Jessica Henderson, Johnica Henderson, Kasey Argo, Kaylee Morris, Emiley Argo and Coty Argo; three great-grandsons and one great-granddaughter; brothers, Ron Compton and wife, Kathy, of Norman, OK, and Jimmy Compton and wife, Sheila, of Mead, OK; and other extended family members and good friends. Funeral services will be held at 2:00 PM on Monday, Feb. 7th, at Brown’s Funeral Home chapel in Durant with Pastor Brent Smith officiating and Mike McGovern assisting. Mr. Compton will be laid to rest at Highland Cemetery with Tony Argo, Todd Argo, Max Argo, Earl Pratt, Kenneth Henderson and Kelby Johnson, serving as casket bearers. The family will receive friends from 5-7 PM on Sunday, Feb. 6th, at Brown’s Funeral Home in Durant. In lieu of flowers, the family ask that donations be made in Kenny's memory to the LifeSong Church of the Nazarene Building Fund, PO Box 1227, Durant, Ok 74702. Online condolences may be sent to the family at www.brownsfuneralservice.com. Services are under the direction of Brown’s Funeral Service, Durant. https://www.tributeslides.com/tributes/show/DTM875HJDZQRN6BM

Kenneth Ray Compton was born Wednesday, November 25th, 1953 in Durant, Oklahoma to R.C. Compton and Letha M. (Moore) Compton. He passed from this life on Wednesday, February 2nd, 2022 at his Calera home at the age of 68. At a young age, Kenny... View Obituary & Service Information

The family of Kenny Compton created this Life Tributes page to make it easy to share your memories.

Send flowers to the Compton family.