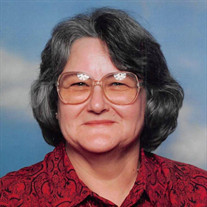 Laurie Janet (Adams) Henderson was born on June 28, 1950 in Durant to Bennie and Rufene (McGee) Adams. Laurie passed from this life on June 23, 2020 at her home in Calera surrounded by her family. Laurie was raised in Albany and has lived in Calera the majority of her life. Laurie married the love of her life Willard Henderson and they were blessed with many years together. She was a childcare worker and a dedicated wife, mother and grandmother. Laurie was a member of First Baptist Church in Calera and was an honorary 4-H Alumni. She enjoyed sewing, cooking, reading and she treasured the time she spent going to her grandchildren’s activities. Laurie was preceded in death by her parents; grandson, Zachary Henderson; sister in law, Connie Adams and brother in laws, Gary Robinson and Roger Alexander. Laurie is survived by her husband, Willard Henderson; children, Shelly Henderson, Curtis Henderson and wife Laura and Eugene Henderson and wife Belinda; grandchildren, Caroline Bennett and husband Jonathan, Dakota Hammond and wife Tiffany, Cameron Hammond and wife Tamra, Marina Henderson and Lariatt Henderson; 10 great grandchildren; brother, Bennie C. Adams; sister, Kim Robinson; sister in law, Linda Alexander and numerous extended family and friends. Funeral services will be held at 2:00 PM Saturday, June 27, 2020 at First Baptist Church Calera with Pastor Jacob Toews officiating. Interment will follow in Rose Hill Cemetery with Todd Amend, Terry McGee, Lariatt Henderson, Cameron Hammond, Dakota Hammond and Timmy Adams serving as pallbearers. Honorary pallbearers will be Glenn Wilson, Ray Wilson, Rusty Guiou and Brent Guiou. The family will receive friends at the Funeral Home on Friday evening from 6-8 PM. In lieu of flowers the family requests memorials be made to Brown’s Durant Funeral and Cremation Service to assist with funeral expenses. Condolences may be sent to the family at www.brownsfuneralservice.com. Arrangements are under the direction of Brown’s Durant Funeral and Cremation Service. https://www.tributeslides.com/tributes/show/3ZBNSTH6P5QSC8L2

Laurie Janet (Adams) Henderson was born on June 28, 1950 in Durant to Bennie and Rufene (McGee) Adams. Laurie passed from this life on June 23, 2020 at her home in Calera surrounded by her family. Laurie was raised in Albany and has lived... View Obituary & Service Information

The family of Laurie Janet Henderson created this Life Tributes page to make it easy to share your memories.

Send flowers to the Henderson family.