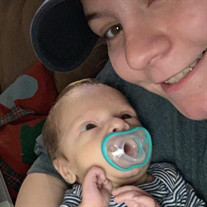 Lincoln Grey Deion Garza was born on January 10, 2020 in Oklahoma City, OK to Elizabeth Garza. He passed from the earth surrounded by his family on April 15, 2020 in Tulsa, OK at the age of three months and five days. Lincoln Grey lived a big life in a short amount of time. Born with the heart of a fighter, he didn’t give up until the day the Lord called him home. Lincoln had beautiful brown eyes that seemed to convey an old soul. From his ‘mean mugging’ to his grin he was just beginning to find, his facial expressions captivated all. Just a few pounds of might and miracle, his future seemed endless. Lincoln was on this earth for just three months, but what beautiful months they were. Three months for a woman to become a mom, for a boy to become a brother. Three months for a family to grow, for love to deepen. Three months of joy, wonder, and love that has changed us forever. Go and rest little Lincoln, your fight is over. Lincoln is survived by his mother Elizabeth Garza of Swink, OK, grandfather Jeronimo Garza of Durant, OK, grandmother Tara Hunter and husband Ethan of McCurtain, OK, aunt Amanda Garza of Lindsay, OK, uncle Cory Tatro of Madill, OK, uncle Ash Cobb of Durant, OK, great grandpa Jerry Garza of Ada, OK and great grandma Valerie Garza of Durant, OK, grandparents Jason and Rachel Gasway of Elkart, TX, brother Aiden Gasway of Achille, OK, uncle Kallon Gasway of Elkart,TX, great grandpa Prentiss Farley of Bennington, OK, great grandma Carolyn Farley of CA, cousin Joe Tatro of Madill, OK, special friend Vickie Hilton of Kingston, OK, grandma Christy Murray of Achille, OK, and many other family and friends. Private family service. We are currently under the Governor’s policy of 10 people or less. Please keep that in mind when coming to the service. We will try our hardest to Facebook live the graveside service. Condolences can be sent to www.brownsfuneralservice.com. Arrangements are under the direction of Brown’s Funeral Service in Durant, OK.

Lincoln Grey Deion Garza was born on January 10, 2020 in Oklahoma City, OK to Elizabeth Garza. He passed from the earth surrounded by his family on April 15, 2020 in Tulsa, OK at the age of three months and five days. Lincoln Grey lived a... View Obituary & Service Information

The family of Lincoln Grey Deion Garza created this Life Tributes page to make it easy to share your memories.

Send flowers to the Garza family.