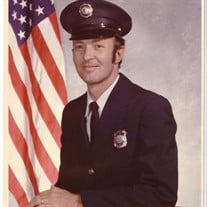 Memorial services for Lowell Kay Moss, longtime resident of Calera, Oklahoma are scheduled for September 4th, 2020 at 2 P.M. Family night will be September 3rd, 2020 from 6:00 P.M. to 8:00 P.M. both held at the Brown’s Funeral Home Chapel. Lowell Kay was born on December 2, 1934 to Luther Kay Moss and Mary (Johnson) Moss at the Moss Family Farm in Albany, Oklahoma. He was a 1953 graduate, and a standout athlete at Calera Public Schools. He majored in education at Southeastern Oklahoma State University. He was a U.S. Army Veteran stationed in Germany during the Korean War. He was an extraordinary patriot when it came to acknowledging veterans who served our Nation. He worked and served in a variety of vocations during a long career which included: City of Dallas Police Officer, Public School Educator, Insurance Agent in Houston Texas, Fireman for many years for the City of Irving, Texas, and a talented carpenter and homebuilder. Lowell Kay was united in marriage to Mary Boyd Sullivan on April 27th, 1957. They have celebrated 63 years of marriage. Lowell Kay’s marriage to Mary was a lifelong journey of devotion and companionship that only death could temporarily separate. Lowell Kay was a loving father to his children. He was Papaw to his grandchildren, great-grandchildren, and great-great-grandchild. He was preceded in death by his parents Luther and Mary (Johnson) Moss, three brothers: Fred Moss and wife Wanda, Kenneth Moss, Walter Moss, and one sister Jo Anne and husband Earl Jackson. He is survived by his wife Mary Moss, son Lowell Miles Moss and wife Deana, daughter Mary Ruth and husband John Talley, daughter Peggy and husband Mike Carlton, daughter Nancy and husband Mike Woodruff, daughter Lisa and husband Jamie Batman, daughter Kathy and husband Stephen Glenn along with fourteen grandchildren. The other special joys of his life were the addition of twenty-four great-grandchildren and one great-great-grandchild. Other survivors include numerous sisters in law, brothers in law, nieces, nephews, and a host of many friends including lifelong best friends Shakey and Ginger Holder. Honorary Pallbearers: Irving Fire Department, John Talley Jr., Joshua Talley, Allen Moss, Michael Carlton Jr., Jake Boyd, Jordan Moss and Jerod Lambert.

The family of Lowell Moss created this Life Tributes page to make it easy to share your memories.

Send flowers to the Moss family.