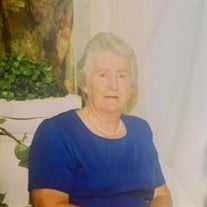 Mary Frances Armor of Calera, Oklahoma, formerly of Bokchito, Oklahoma, passed away on January 7, 2021, in Sherman, Texas, at the age of 84. She was born August 22, 1936, to Rice Bostic and Pearl Marie (Wagoner) Jones in Roanoke, Texas. Mary married W.C. Armor on May 26, 1955, in Justin, Texas. They lived in Justin for a while before making their home in Bokchito, Oklahoma, where they raised three daughters. Mary attended her early years of school at Dodson School in Bokchito and Mead School. She graduated from Northwest High School in Justin, Texas, and attended Murray State College in Tishomingo, Oklahoma. She worked at M.C. Easter Co. in Bokchito, First National Bank in Durant and First State Bank in Bokchito. Mary made the front page of the newspaper when the Bokchito bank was robbed and she tried to slip out the back door to get help. She was self-employed as a tax preparer for many years in addition to farming and ranching at her home in Bokchito. She enjoyed playing with her grandchildren, raising chickens, gardening, as well as crocheting and quilting. Mary was of the Christian faith and worshipped with the Church of Christ. She was preceded in death by her parents, Rice and Pearl Jones; her husband, W.C. Armor; and her sister, Wanda Pope. Mary is survived by her three girls and their husbands: Melinda and David Craige, Bokchito; Karen and Roger Hedgecock, Bokchito; Kristie and Lance Luke, Calera; her grandkids: Dr. Clairissa Maples, Edmond, Oklahoma; Collin Craige, Madison, Wisconsin; Kaitlin Hedgecock, Rattan, Oklahoma; Tayler Hedgecock, Germantown, Tennessee; Evan Luke and Kelsey Luke, Calera; her great-grandson, River Duncan, Rattan; her sister, Ruby Reed, Tioga, Texas; and numerous nieces, nephews and other family. Pallbearers will be her sons-in-law and grandsons, David Craige, Collin Craige, Roger Hedgecock,Tayler Hedgecock, Lance Luke, and Evan Luke. Services will be held at 2:00 p.m. on Tuesday, January 12, 2021,at Brown’s Funeral Service Chapel, Durant, Oklahoma. Internment will be at Bokchito Cemetery. There will not be a family hour. https://www.tributeslides.com/tributes/show/S29FDM3WFDT3RTCT

Mary Frances Armor of Calera, Oklahoma, formerly of Bokchito, Oklahoma, passed away on January 7, 2021, in Sherman, Texas, at the age of 84. She was born August 22, 1936, to Rice Bostic and Pearl Marie (Wagoner) Jones in Roanoke, Texas.... View Obituary & Service Information

The family of Mary Frances Armor created this Life Tributes page to make it easy to share your memories.

Send flowers to the Armor family.